The Federalist has the story of how CNN's Town Hall Hate on guns got off to a rocky start when one of the students accidentally asked Senator Bill Nelson (D. Uranus) an accusatory, inflammatory, and personally-insulting question that CNN had intended be directed to Dana Loesch.


“I had a question for Ms. Loesch but she’s not here yet, so, for her and the NRA, which she’s probably watching, and all of you puppet politicians that they are backing: was the the blood of my classmates and my teachers worth your blood money?”

Rather than chide the questioner for such a dishonest, partisan screed, Tapper immediately jumped to Nelson’s defense.

“Senator Nelson, you don’t have to answer that question,” he said. “Let’s move on to the next question.”

The crowd jeered, and the student was not happy. “Excuse me? I’m a student. I should –”

“I understand that,” Tapper interrupted. “But your question, I thought you were going to ask Senator Nelson a question. Your question sounds like you want to ask Dana Loesch a question in the next segment. And I’m happy to do that, if you want.” 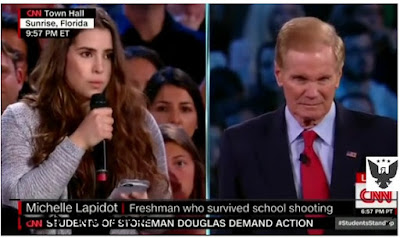 Kinda makes double bind questions like, "are you still beating your wife?" sound tame by comparison, doesn't it?  "This... is CNN". I mean, do you think the kid came up with this herself?  More than one student has complained that CNN gave them scripts to follow and didn't want to hear their actual experiences or opinion.


Colton Haab, one of the students who survived last week’s mass shooting in Parkland, Florida, told the media he chose not to attend the town hall, because CNN tried to give him written questions to ask at the event. Haab is a Junior ROTC enlistee who personally helped dozens of students stay safe during the shooting by moving them to a more secure classroom and setting up Kevlar screens to shield students from bullets.

“CNN had originally asked me to write a speech and questions and it ended up being all scripted,” he told a local news outlet. “I expected to be able to ask my questions and give my opinion on my questions.”

I didn't watch it.  I think anyone knew which direction this was going to go as soon as it was announced, it's just that CNN proved to be more despicable than even my expectations of CNN.  My expectations for CNN's professionalism make a pretty low bar, and they were so far below that they couldn't see it with high power scope.  If you're interested, The Federalist has a short interview and audio podcast with Dana saying what it was like from her point of view.