The topic comes up in many places, but my motivations for this post are mostly my own talks about my receive only antenna and the examination of the radio frequency battery charging system, along with an article in the trade magazine Microwaves and RF, "Reversing 25 Years of Antenna Degradation".  Most of us carry a cellphone.  In the article, the author states that over that 25 year interval we've thrown away 90% of the transmit power from the phones as the antennas have become a progressively worse compromise in the cellphone networks.

How can that be?  Another way of looking at it is that the networks we connect to have improved so dramatically, that they’ve been able to deal with phone designers screwing up the performance of the handset antenna without much backlash from consumers.

Antennas can be difficult to wrap our heads around because they're both electrical and mechanical.  The basis of this (in my opinion) is that radio waves have physical size, and the size of the antenna has to match the size of the radio waves it's going to handle.  That's a concept that most people simply don't have until they take a class to get a ham radio license, or start looking into building an antenna.  Until that time, either they never saw the radio had an antenna (most AM/FM radios have an internal antenna the user never sees) or antenna was just a short piece of wire sticking out of the radio.

Every frequency of radio has a specific wavelength, and they always follow the relationship that frequency times wavelength is the speed of light, or c=f*l.

Now an antenna doesn't have to be a wavelength long; in fact they fit the antenna best when the antenna is one half wavelength long, fed at the center.  This is going to blow some of your minds, but the current and voltage distribute like this on a half wave long, center-fed antenna, with each side 1/4 wave long.  Let's call the voltage positive on the top side (left) and negative on the bottom (right); so current is positive above the line, too. 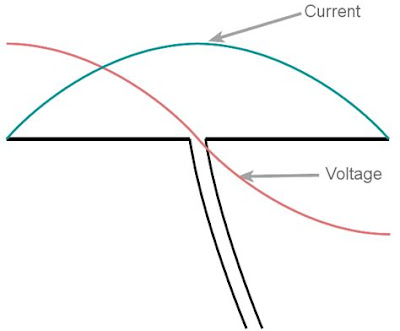 The "why??" is pretty simple.  Remember that power is voltage time current, so if the power is constant, the product can stay the same while the current and voltage can both vary from zero to their maximum along the wires.  The current is minimum at the ends because the current has nowhere to go.  Electrons can't go past the end of the wire.  The voltage is maximum at the ends because the current stops; since I*V is constant and I is getting very small, the voltage gets very big.

Note that the picture is a snapshot of a very short period in time.  The voltage is continually changing polarity, end to end, at the frequency of the wave, and so is the current, but the current and voltage being out of phase with each other as pictured (one max while the other is min) doesn't change.  There's a good animation in the wikipedia.

By the way: if you want to build a dipole, two quarter wave long wires fed in the middle, a century of experience says to cut the wire to 468/f, where f is the frequency in MHz and it gives you the answer in feet.  Antennas interact a lot with their environment, so it's not uncommon to have to tweak those dimensions to get the best antenna, but this ordinarily gets you close enough to start.

Remember how I said that "the size of the antenna has to match the size of the radio waves it's going to handle"?  There's some slack in that statement because as you move the frequency away, it can still "mostly fit".  This is what's called the bandwidth of the antenna.  This drawing shows the wave fitting on the antenna because the peak of current is a half wave.  If the frequency gets too far away, the current would go below zero and every cycle would look a little different because the position of where it crosses zero would move around.

In reality, non-resonant antennas are used regularly.  Just as Power is voltage times current and constant, let me drag a concept back from AC circuits: impedance.  Impedance is an AC resistance which includes the effects of resistance and reactance.  Just like DC resistance is defined as Voltage divided by Current (V/I), impedance is V/I with AC measures.  Antennas have a defined impedance, like any AC circuit, and you can make an antenna's impedance look better with tuning circuits.  Manual and automated tuners are commonplace.  They allow you to make a non-resonant antenna more useful.

Everyone is familiar with these antennas and common versions of them: the small rubber-coated springs used on handheld radios ("rubber ducky"), car AM/FM radio antennas, CB whip antennas, even AM radio broadcast antennas, are all versions of quarter wave verticals.  Since the length of a half wave dipole is 486/f, the length of the quarter wave is half that or 234/f.  A CB whip, for example, should be 234/27.5 MHz, or 8-1/2 feet long.  It's very common to see "base-loaded" CB antennas that are substantially shorter than that.  Base-loading is a way of transforming the impedance of the shorter antenna up to the impedance "desired" by the transmitter.  As a rough rule to go by, antennas shorter than about 1/8 wave (117/f, or 4-1/4 feet in the case of the CB whip) are harder to base load and less efficient than longer antennas. 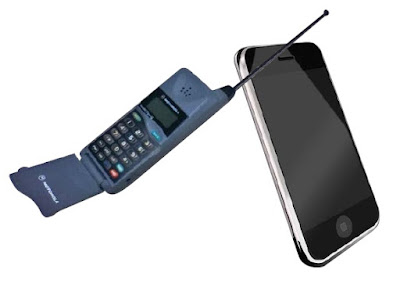 This is where the loss of 90% of the transmitter power comes from.

Tomorrow - deeper into the weeds.