Saturday was the annual hamfest here in the Silicon Swamp.  I report on hamfests regularly because Mrs. Graybeard and I go to a couple regularly.  Not every one within a few hundred miles, but a couple.  For those unfamiliar with the term, a hamfest is a generally a swap meet with a lot of other interactions - a place where hams meet in person, catch up with old friends, share new stories and just be social.  Some fests have a full schedule of meetings and technical talks; some are simple swap meets.  Amateur radio is a social hobby, by and large, and is full of guys who can talk for hours on many things.  The granddaddy fest is held every year in Dayton, Ohio, the Hamvention.  If you're a ham, you should go to Dayton at least once.

For the first time in several years, I found something I wanted to take home.  A radio called an Icom IC-703 in a complete station.  Here's the illustration from their brochure. 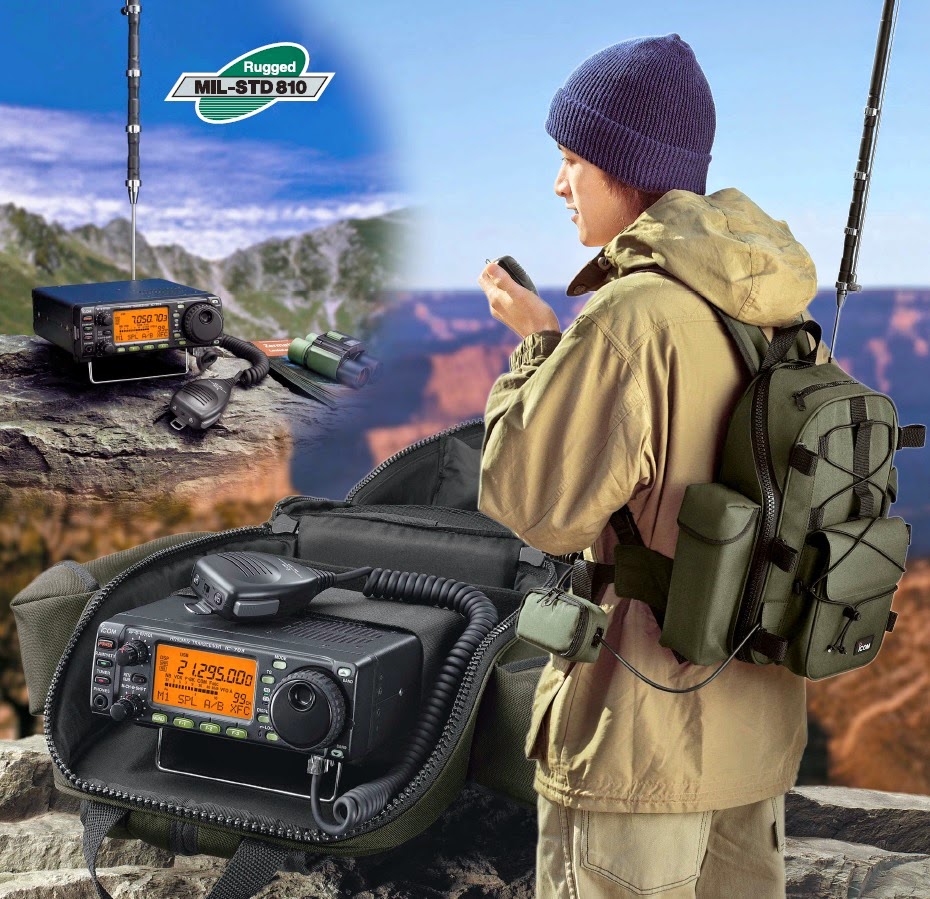 The '703 is not currently in production, but I consider it a good SHTF radio, and it frequently gets mentioned in places like Arfcom.  It covers all of the HF ham bands from 1.8 to 30 MHz and the 50 MHz 6 meter band.  The radio I found came with that microphone and backpack you see, along with too much to list.  It included the 9.6V BP-288 NiCad battery pack Icom sold for the radio.  The radio is a low power (also called QRP) transmitter, 5W off that 9.6V battery, but 10W off a car battery (or my 35 AH AGM battery from my solar panel).  It didn't come with that antenna, though!

The Icom specifications page shows the transmit current draw to be 2 amps with unsquelched audio from the receiver around 350 to 400 mA.  Most commercial radios are rated for about 20% transmit, which would equate to 0.72 Amps average (20% 2 and 80% of 0.4).  That 9.6V battery pack's 2800 mAH will power around 4 hours of operation at that current drain.  My 35AH battery will power it for over 38 hours (and it will transmit at twice the power output).

The radio was in excellent shape, the subject of an estate sale.  The ex-owner's widow was selling it and said she thought he had never used it.  Regardless if that's true, it looks mint and had virtually everything that comes with the new radio along with a good assortment of accessories.  I had it on the air long enough to verify the major functions are working.  The antenna tuner was happy with my antennas (it should be: they're all full-sized, good antennas), the DSP worked, it had an optional narrow filter for CW (Morse code) operation, and an hour of poking around with it showed no problems.