This started out in comments to previous comments, but I pretty quickly ran out of space in the comments form.

Multiband vertical antennas are common good compromise, but they have a reputation for being noisier than horizontal antennas.  It's true because electrical fields have to intersect the ground at 90 degrees, making the fields from noise sources become vertically polarized near the ground. They are ideal for tiny yards, though, since they take up little horizontal space.  A true 1/4 wave vertical is close to 35 ohms impedance, and requires another quarter wave worth of wire extending out from its base to create the "ground plane" the radiating part works against.  A lot of effort has gone into making "no ground radials needed" verticals.  I had one.  It worked, but my replacement antenna with ground radials has worked better.

Wheelgun commented "I have considered buying one of the All-in-one verticals. Hygain, and MFJ (or whatever part of MFJ) and a few others sell them. Just not sure I trust the reviews or not."  I understand.  My first antenna in 1976 (the Novice class had privileges only on 80, 40, 15 and 10m) was a Gotham vertical (a good honest critique).  These were advertised in QST as "all band, 80 to 6 meters".  What they were was about 20' of aluminum tube with poor joints and a B&W Miniductor at the base.  The hidden problem is that as the antenna went from being too short to too long when you used it above 40 meters, the loading element needed to switch from a coil to a capacitor.

It was essentially useless as sold, being as much an "all band, 80 to 6 meters" antenna as any other 20 feet of tubing from the hardware store.  After I fixed the joints and changed it from a segmented arch to actually being vertical, I used it as a support for wires on 15 and then 10m.

So while I know from friends that the Cushcraft R8 is a good multiband vertical, I'm still concerned about ads vs. reality.  I've owned a GAP Titan, and they really are good on the rated bands.  My current 80 to 30m antenna is a Cushcraft MA8040V.  I was scratch designing an antenna for 80 and stumbled across this one, which looked so much like my design, with 40m added, that it was almost a kit for my design.  Another standby for small spaces is the 5BTV (5 Band Trapped Vertical) by Hustler and its 6 Band sibling.  In short, HyGain, Cushcraft, GAP, or Butternut (and probably more) all produce good antennas I'd trust.  I also echo Weetabix' comment that eHam or other review sites (including the ARRL) should be in your reading.

Making antennas isn't hard.  Measuring their performance can be pulling-your-hair-out hard because they interact so strongly with the environment - it's their job!  (Which I tend to believe is what's behind the Crossed Field Antenna's mixed history).  It's especially hard below VHF frequencies because of the sizes of everything needed. Simply getting a list of what someone worked is pretty useless; any antenna might work anyplace if the conditions are good.  The best way to evaluate an antenna without a lot of test equipment is to A/B switch it vs. a standard; pretty prohibitive in cost and area to do at home.  If you can switch antennas during a contact you can quickly see if one works better; if you take the old one down and use the new one, you can't get that immediate comparison.

BTW, Wheelgun, you also commented on Software Defined Radios for HF.   The Flex 6000 series is an almost identical block diagram to one I did a few years ago (and published).  Unless they did something really stupid, that will outperform any conventional radio around.

NVIS (Near Vertical Incidence Skywave) is a local HF mode created by forcing the fields from the antenna up by running the wires close to the ground.  I've seen articles on field expedient antennas simply say to mount the antenna a foot or so above the ground.  The permanent or semi-permanent installations say to mount it between 1/8 and 1/4 wave up, and some say to use a wire director under the radiating dipole, like a beam would use.  Any horizontal antenna mounted close to the ground has a significant high angle radiation. NVIS systems optimize this.

Weetabix, it sounds like you've got it made.  You just need to hoist the center of that "Maple Leaf Mini" up on a TV mast or something to get it up in the air.  Shoot for 1/8 wave or higher on the lowest frequency of interest, and don't be afraid if it's not perfectly straight and level.  You can drape the ends down, or slope the whole antenna down.   I ran a 15m dipole sloper off the eaves of my house in the late '70s for a while.  It got me contacts until I could put up a better antenna. 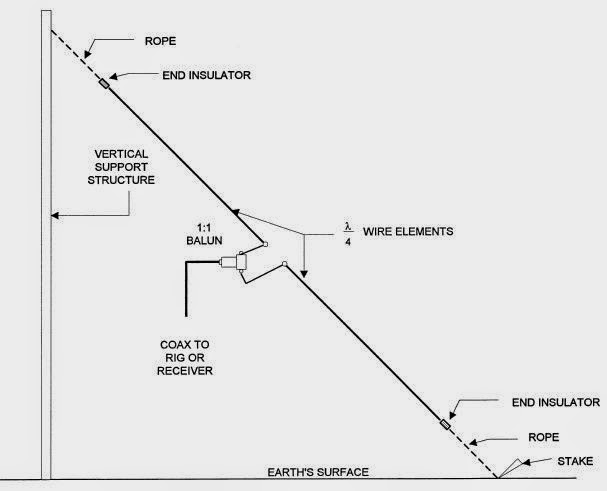 Any antenna put outside like this will outperform one left in its box. Guaranteed.  It's also pretty stealthy; the only thing conspicuous is the coax running to it, which can be the small RG-58 if you're running 100W.

My current antennas are the MA8040V vertical (with radials) for 80, 40 and 30.  For 20 to 10, I have a Tennadyne T6 Log Periodic and for 6m, a small log periodic called a KMA5054 which also works well on 2m and puts out something on 432 - KMA Antennas seems to be out of business.  The two LPDAs are mounted on a short Aluma tower - which used to be called something like a "ham's special".  It cranks over with a steel post and boat winch rig  which I designed myself.  The T6 is at tower top height, about 25', and the KMA is at the top of the mast, about 30'.  This is a pretty low end station, but represents itself pretty well.

Posted by SiGraybeard at 3:36 PM