Today, transistors that would be used in an AM radio are silicon, but in the early 1950s (and for another 15 to 20 years) another element, germanium was used in making most transistors.  TI had been making germanium transistors but the market had been slow to respond, comfortable with vacuum tubes.  A vacuum tube portable radio was a large thing to lug around.  The typical portable tube radio of the 1950s was about the size and weight of a lunchbox, and was powered by several heavy, non-rechargeable batteries. A transistor radio could fit in a pocket, weigh half a pound, and be powered by a single, small, 9V battery. 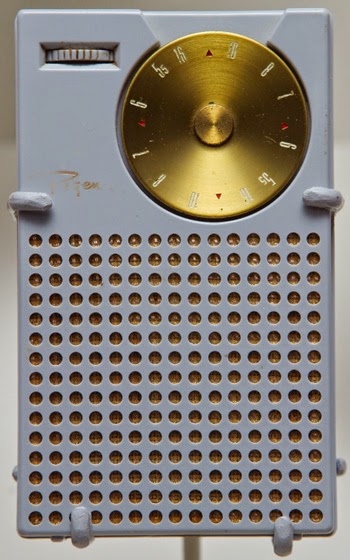 With these pros in mind, TI’s executive vice president Pat Haggerty “decided that the electronics industry needed a transistor wake-up call and that a small radio would provide it,” according to TI’s Web site.

TI started down the path to the TR-1 in the spring of 1954.  Although they had made transistors for a few years, individual transistors were hand made(!) and radios made with them frequently needed manually selected parts, due to the varying parameters in the production transistors.  TI partnered with Regency Electronics, where engineer Richard Koch developed a feedback circuit that accommodated the variation in the transistors.  With this circuit, it was possible to open the floodgates of manufacturing, stuffing printed wiring boards with miniature parts to make the pocket-sized receiver.

The new transistor radio would be introduced in New York and Los Angeles by mid-October to take advantage of holiday sales. The 5×3×1¼-inch radio used four TI transistors and a TI subminiature output transformer.  When it went on sale on November 1, the Regency TR-1 cost $49.95. Although its price was high in terms of 1950s dollars, nearly 100,000 of the pocket radios were sold in a year.

Transistor radios were more than a new market, they became a cultural icon and gave rise to much of the music-centered culture of the 50s and 60s, from Elvis to the Beach Party movies of the late 50s/early 60s to the Beatles, the Beach Boys and beyond.  It has been estimated that over seven billion transistor radios have been manufactured.