No, really.  Unplug your phone, unplug the TV, just do anything it takes to avoid the last minute campaign idiocy. We're getting our first real cold front of the season tonight through tomorrow.  The coolest it has been since last April was 59 a few weeks ago.  Sunday morning is forecast to be 43.  That's always accompanied by strong winds, so there will be no fishing, unless I figure out a place to take the boat that's sheltered enough.  Otherwise, I'm unplugging the phones and spending the weekend in the shop.  I'm building a new fishing rod; I can use the time.

There's so much idiocy everywhere, I'm starting to twitch.  I haven't counted, but I think I get about 20 solicitations for contributions every stinkin' day from everyone from the Stupid Party, to organizations like FreedomWorks, even to Florida's schizophrenic ex-Republican Governor, now Democratic Candidate, Charlie Crist, the man who truly puts the Goober in Gubernatorial. While current Governor Rick Scott is no great communicator and a crappy politician, not being a career politician isn't necessarily a bad thing.  He has helped bring lots of companies into the state, bringing in about a million jobs.  Crist left the Stupid Party to run for Senate last time as No Party Affiliate, and then joined the Evil Party to try and get his old job back.  I can't understand how this can possibly be a close election, but they're saying it is.  So Charlie's most recent employer,  ambulance chaser John Morgan, donated tons of money to get a "Medical Marijuana" constitutional amendment on the ballet, a sure way to get out the abysmally low information Evil party voters - it has been tried in several states so far.  (Florida has a peculiar system where laws that can't be passed can be made into constitutional amendments on petition, and then amended by a super majority.  We get truly absurd laws, like the pregnant pig amendment, out of this).

I get phone calls from Mike Huckabee telling me I need to go vote.  Whoever donated the money that paid for that call, that was a waste of your contribution.  I get phone surveys on my voter attitude. I let the answering machine cut them off.  When I get to work in the morning, I have those same messages on my voice mail.

Nationally, we get things like the Evil Party saying Stupid Party candidates want to ban birth control.  I'm unable to find verifiable instances of this at all.  We get things like the "Potty Mouth Princesses", a truly awful ad funded by some feminist idiots who thought it would be "edgy" to dress up a bunch of little girls in princess outfits (one or two look to be 6) and have them drop F-bombs while reciting all of the same recycled and disproven stats they always cite about women earning less than men, large percentages having been raped, and all women being systematically discriminated against.  The war on women card seemed to work last time, so they're trying it again.

I've said here many times that I hate day to day politics, and I've said that I think the role of money is overplayed.  Honestly, if you pay attention and know anything about the candidates, do the ads affect you at all?  If you're in Colorado, is there anything an ad could say about Cory Gardner that would make you vote for Udall, or vice versa if you prefer Udall?  If you're sure of your values and what you believe, does it matter if the other guy is yelling at you from the other side of the street?

No.  Turn it off.  Get outside.  Go to the range.  Go fishing.  Clean your guns.  Do anything to get away from it. 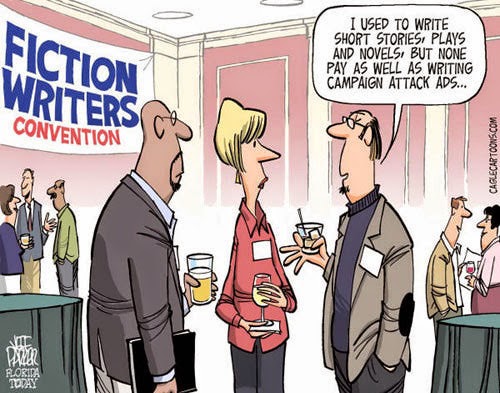