The Last Vacuum Tubes Just Got Put on the Endangered List

If you're "of a certain age", say above 45 as a rough guess, you probably know what vacuum tubes are even if you're not an electronics geek.  Chances are you remember the TV or radio warming up for 20 seconds before the program started.  If you were a child in the 60s, you might have even taken vacuum tubes from a TV set that wasn't working up to the store to test those tubes on a drugstore tube tester.  I actually still have two tube-based radios in the ham shack, and run them from time to time, although my "everyday" operation is on modern, feature-rich, solid state radios. Mrs. Graybeard has a prized collection of several tube-based Zenith Transoceanic radios.

Solid state: transistors, silicon diodes, FETs, integrated circuits, and other devices, have been replacing vacuum tubes in electronics since at least the time of that first transistor radio I wrote about last week.  Today, the only places they're used is in industrial and military electronics that are both operating at extremely high frequency and extremely high powers.  While there are a couple of niche markets where vacuum tubes are still strongly used: high end audio and instrument (like guitar) amplifiers, and there's a very active vintage radio market, where they're referred to as "boatanchors".

If you're not active in those areas, I'd bet that the only vacuum tube in your house is the power amplifier in your microwave oven.  The only other one you're most likely to have is a CRT.

Microwave ovens use a tube called a magnetron, an invention that dates back to WWII.  The ovens work in a frequency band close to the WiFI band at 2.45 GHz, and generate thousands of watts of power; your microwave is probably around 1000 Watts output.  On the other hand, aircraft have used solid state transmitters for Collision Avoidance Systems just below that frequency, around 1000 MHz, since the 1980s.  The last TCAS system I worked on generated 1000W and used just three power transistors.


The product of interest is Freescale’s new MHT1003N, a 250 watt LDMOS transistor for 2.45 GHz that provides a power-added efficiency (PAE) of 58%.  ...  Using the MHT1003N, manufacturers can use from one to eight of these 250 W units to build a microwave oven with the desired power level.  And the magnetron’s 4 kV power supply goes away in place of a supply of 28 to 50 volts.  Furthermore, the crude on-off control of the magnetron can be replaced with full variable power control.  Using multiple antennas, one per amplifier, provides better coverage of the cooking chamber.  This allows food to be cooked more precisely while the unit operates more efficiently.  And the product lifetime is significantly greater.

LDMOS - Laterally Diffused Metal Oxide Semiconductors - are a type of silicon transistor construction first developed in the 1990s.  They're falling out of favor in the last couple of years, being replaced by GaN - Gallium Nitride - which offers better efficiencies and better microwave performance.   Changing the power supply from that 4000V supply to a 28 or 50V supply will take the largest weight in a microwave oven out; its power transformer.  Going solid state with several amplifiers, each running its own antenna promises better, more even cooking, better power control, fewer issues with hot spots and power loss as the oven ages as benefits to the user.

You can be sure these will be quite a bit more expensive for the early adopters, but historically, it looks like the handwriting is on the wall for vacuum tube microwave ovens.

I'm not sure it's actually on the market, but a company called Midea has previewed the first consumer microwave oven based on the Freescale transistors, back in June. 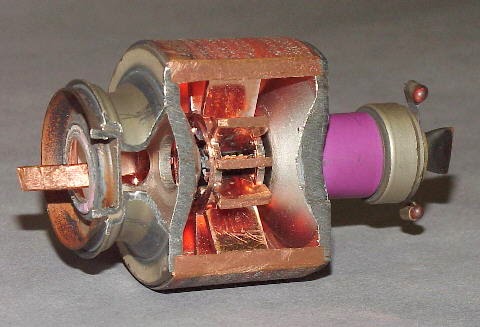