Techy Tuesday - Will New Cars Have Radios in 2020?

According to the electronics trade magazine website Planet Analog, there's talk in the industry that cars may not have AM or FM radios in the not-too-distant future.


These are difficult times for the commercial broadcast-radio business, both AM and FM. According to various articles, such as this one from The Los Angeles Times, listener ratings are continuing to fall, and some carmakers -- where most radio listening is done, apparently -- are considering eliminating radios in the car completely, and not even offering it as an available option. Today’s drivers don’t need old-time radio (a.k.a. "terrestrial radio") for music, weather, traffic, news, or whatever, as they have smartphone connectivity, MP3 players, satellite radio, and much more.

The linked LA Times article about format changes at KFWB AM in El Lay talks about dwindling numbers of listeners for AM radio.  It includes this line:


KFWB has been particularly hard hit as listeners have abandoned AM radio at a steady rate.

The station drew 172,000 listeners a week in July, a small sum considering that it broadcasts to a region that has millions of potential listeners. Top-rated music station KBIG-FM (104.3) pulled in nearly 3.5 million during the same time frame.

The Wall St. Journal, though, presents this graph of what audio sources car owners are using: 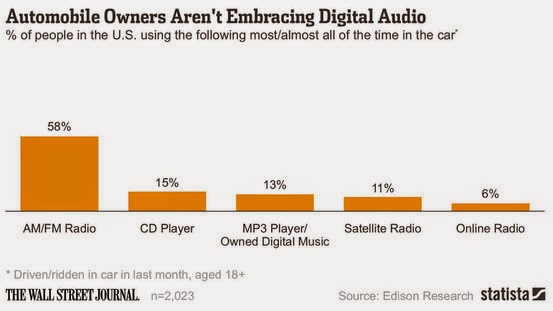 Survey respondents still said they tended to get their new music from AM/FM radio.  Some 75% say they listen to the radio to stay up to date, while 66% get new music from friends and family. YouTube and Pandora come in third and fourth with 59% and 48%, respectively.  That varied with age, though.  Younger people are more likely to use digital sources. YouTube takes the top spot among 12-24 year olds, with 83% using the site to keep up with new music. Friends/Family and Pandora are tied for the second spot with 71%.  But even among young people, 65% still use radio to stay up to date.

Buried in all that data is a statistic that surely has an effect on all this.  The average age of cars on the road is 11.4 years - the oldest ever.  That was in the infancy of digital music.  The iPhone has only been around for about seven years, with the first Android phones hitting the market six years ago.  MP3 players existed then, but services like Pandora, I Heart Radio, and other streaming audio services didn't exist.  What else are you going to listen to in a car that doesn't have the most modern services?  Someone did this image depicting the change in car radios we're talking about: 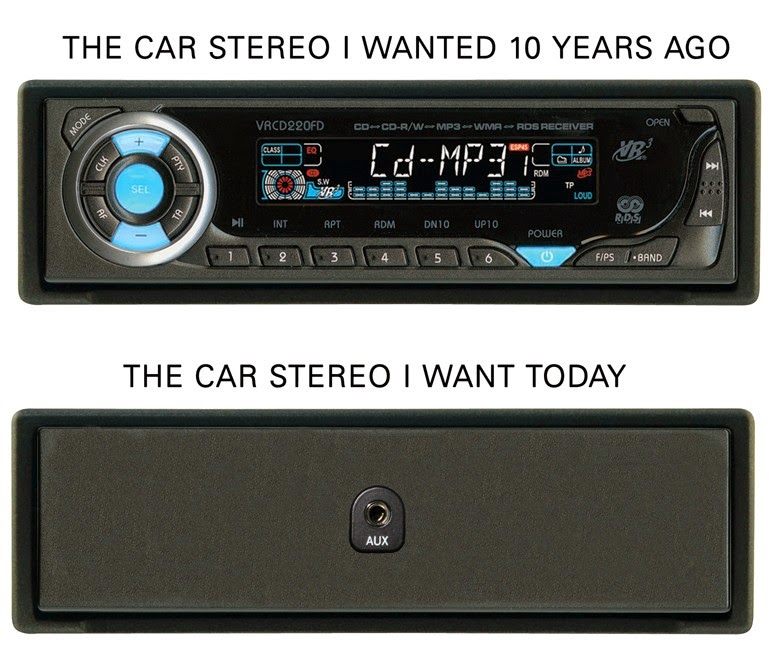 Like all good humor, there's a kernel of truth in there.

Personally, I find it hard to imagine not having radio services in the car, but I've been a radio geek since I was a tiny kid.  One of my earliest memories is sitting with a cousin on the sand of Miami Beach at night listening to this marvelous thing he had called a short wave radio.  I don't even remember how old I was, just that I was old enough to know that England was a long way away and hearing the BBC was magical.  Years later, in 5th or 6th grade, my parents got me a clock radio so that they didn't have to wake me up for school.  I learned that if you tuned carefully across the AM dial, you'd hear stations from far away.  WABC in New York City or WCKY in Cincinnati?  Easy catches any winter night when the thunderstorms were gone.

I had Sirius satellite radio for a while but when most of your driving is 15 minute commutes, it doesn't make much sense.  On long trips lately, I've just plugged my phone into that aux jack and a USB charger, listening to streaming radio.  It's music or programming I want to listen to, but it doesn't have the local flavor of the local stations; the local talk show that discusses the goings on around town.  Homogenizing the country so that everyone listens to same programs is great, to a point, and there are FCC appointees (at least one) dedicated to killing off local broadcasting; the better to quell dissent with.   We still live in our communities, and local stations can reflect that.

What do you think?  Is local broadcasting so dead that car makers shouldn't even provide the radio as an option?