It will take a while to make it down to the commercial sector, but a new world record for speed in a fiber optic link has been set. The High-Speed Optical Communications (HSOC) team at Denmark Technical University (DTU) has announced a new fiber-optic technology that transmits at 43 Terabits per second (Tbits/s) using a single laser source.  The team broke the existing 26-Tbit/s record set by researchers at Germany's Karlsruhe Institut für Technologie.

The details are a bit esoteric and I need to talk a little about how data is sent over fiber optics.  To begin with, most fiber optic lines are capable of carrying many different colors of light.  They are optically big compared to the wavelength of light, so light bounces around in there without regard to color (and optical guys always refer to wavelength, not color).  It's literally like wire; you can put many frequencies on it and they propagate down the fiber just as easily.  Electromagnetic field guys would say that the light's EM field can take on many different patterns, making it a multi-mode fiber.  In contrast, there are also single mode fibers which are more selective in what they transmit, only allowing certain frequencies.  It's intended for single wavelengths and one mode of transmission, but other wavelengths can fit in there, too.  Usually shorter wavelengths/higher frequencies; in light a green wave can fit in a red single mode fiber, or blue in green single mode fiber.

What's novel about this is not just the speed, but the approach.  The DTU team used an optical fiber with seven single mode fibers in it, an idea from NTT.  One of the fiber paths was used to synchronize the other six, and each of the six carrying a 320 Giga-baud (billion baud) channels on a different color light (called Wavelength Domain Multiplexing).  The six WDM channels were then polarization-multiplexed (that is, one set of data are polarized in one direction, while the other set of data takes an opposite polarization) with each optical pulse carrying two bits of information in quadrature using the differential quad phase shift keying (DQPSK) format. 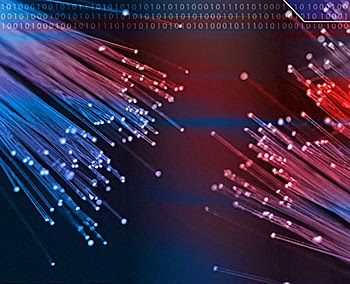