Watching the Markets and Twitching

Bill Bonner's free newsletter opened the other day with the subject, "The Most Dangerous Market Since 2008" - and this was early Thursday before the market recovered slightly on Friday.  But a single day or week doesn't make a bull market, no matter how bad it looked.  The problem is that the Federal Reserve Bank is running the market by supplying virtually unlimited amounts of money to the TBTF (Too Big To Fail) banks, who get it first.  The US stock market is absurdly over priced!  As Bonner says:


First, as we have been warning in these pages, it is overpriced. Ned Davis Research puts the Shiller P/E or CAPE (cyclically adjusted price-to-earnings ratio) of the US market at 23 – well over our limit of 20. Mebane Faber calculates it differently, and comes up with 25. Robert Shiller, who popularized the metric, puts it at just over 24.

By way of comparison, that makes US stocks about twice as expensive as shares in Britain. The CAPE for the British stock market is about 12.

And compared to Russia, US stocks are four to five times more expensive, per dollar of cyclically adjusted earnings. The Russian stock market trades on a CAPE of just 5.

Sell US, buy Russia?  If you're chasing yield, it may not be a bad idea.  Since the flow of the really big money is what moves the market, it's worth looking at an index of the "Core Holdings" of these big investing corporations.  These are the ones that they rely on the most.  This chart, from the daily Stocktiming.com newsletter, shows the climb in the prices remaining in a well defined channel until about August, when it started going largely sideways.  You might remember the Dow hitting it's nominal peak (not adjusted for inflation) back in Early September. 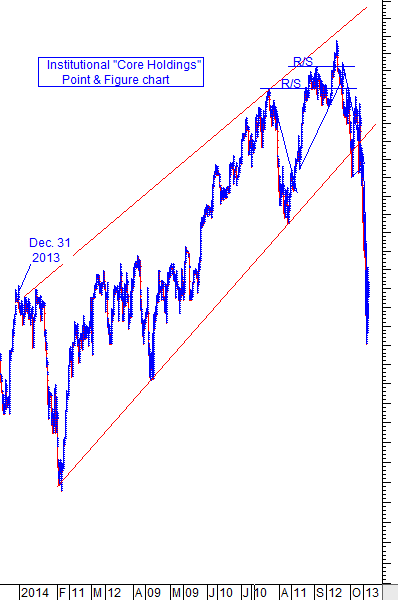 The drastic drop below its lower (or support) line is a red flag warning.  This was Thursday's data, so not 100% up to date, but it's unlikely Friday's rally changed it much.  So if these banks are getting out of their core holdings, where are they putting their money?  Russia?  Europe?


Facts are hard to dispute but easy to spin. Already, the Russell 2000 is in a 10% correction. Judging by history, the Dow Jones Industrial Average shouldn't be far behind. A major correction or crash would be definitive proof this market is wearing no clothes.

Failed rallies are extremely significant. Previously, whenever there were major or minor selloffs, buy-on-the-dippers would come in and change the market's direction. On a chart, you'd see a distinctive "V" pattern as buyers overwhelmed sellers. This pattern has continued for months – until recently.

On the market's worst days, the Fed would conveniently appear with a new QE program or a promise to keep interest rates low for a considerable time (that's getting old). Soon, though, these bandages will not work. Failed rallies mean the party is almost over and a bear market is getting closer (and may even have arrived).

Is this a bear market or just a correction?  It's only down around 7%.  It has been argued (and reported here) that we're well overdue for a big correction.  A target DJIA number tossed around is 6000, which can be seen on the charts at that post, and that would mean the market goes down by over 60%.   Blood in the streets.

Scared of the market?  I am.  But what's the alternative?  Bonds?  From Zerohedge:
Anyone who would be buying government bonds denominated in dollars from a central bank committed to devaluing that currency needs to have their head examined - but that's what's happening.  In the last month, two of the last remaining inflation hawks in the Federal Reserve governing committee have retired (or been drummed out).  Janet Yellen now has nobody trying to tie her hands back except herself.  While these two governors had been arguing to continue tapering the Quantitative Easing (money creation) at $10 Billion per month, the board voted to reduce the tapering to $5 Billion/month.  In plainer English, they're not arguing to not create money out of thin air, they're arguing to create $10 billion less per month, and that's too radical for the Fed!  In fact, there are those on the Fed who think we need to drop interest rates even further, and since they're essentially zero, that means more QE.

So here we are in the mildest of corrections (if that's what this is) and already Fed member James Bullard (head of the St. Louis bank) said we need to extend QE.  QE4?  And that's what propped the market back up on Friday.

Tell me the Fed doesn't completely own the US market.

Time will tell if this was a minor burp in the market due to concerns over Europe or Ebola or "... an undigested bit of beef, a blot of mustard, a crumb of cheese, a fragment of underdone potato..."(to quote Scrooge), or if it's the beginning of the snap back that the market patterns predict.  Jim Rogers, who's a pretty good investor appears to think it's the snap back.  He says, "It's time to sell everything and run for your lives".

(Usual disclaimer: I'm just some dood on the intertubes with a blog; if you're listening to me for financial advise, you're really stoopid).