According to an article in industry magazine Microwaves & RF, drug delivery systems which seem like they're out of a Sci Fi movie are landing on the market now.


Drug-delivery methods have achieved science fiction status following news of two breakthroughs: A wirelessly controlled contraceptive chip that can be implanted in women, and pills that are able to text medical professionals and caregivers that patients have taken their medicine. Whereas this may sound like a storyline from an episode of “Star Trek,” what we are talking about are here-and-now realities.

Let's tease those apart.  Wirelessly controlled contraceptives?  It's a system that's implanted in a woman's body and can be turned off or on under control of a wireless link (the new topic of Body Area Networks is pretty actively researched these days).


A computerized contraceptive chip implanted below a woman’s skin could be wirelessly activated or deactivated for up to 16 years. The chip, which is about the size of a thumbnail, releases a 30 microgram dose of the hormone levonorgestrel—commonly used as an oral contraception.

This one is a year or two away, and raises more questions than answers.  Strangely, its development was funded by the Bill and Melinda Gates Foundation.  There are no known studies that can tell what 16 years of being housed in the human body might do to the chip, and no known tests to emulate that.  Dispense 30 micrograms daily?  Seems like a pretty precise measurement to be made every day in this hostile environment for 16 years.  And why 16 years?  If a young woman starts on a contraceptive at 16, that covers her to 32.  Is that enough?  Perhaps they should try for a shorter service life and refill or replace the device more often.  Finally, like all wireless systems, someone better pay attention to the idea of malicious software or undesired parties turning the contraceptive on or off against the desires of the woman.

The texting pill is a bit of a misnomer; it doesn't actually send the text.  These are devices made by Proteus Digital Health.  The idea is that a small exposed silicon chip is in or on the pill.  The exposed chip has a pair of dissimilar metal pads that will become a battery when an electrolyte - stomach acid - fills the space between them.  That powers the pill long enough to send a message to a patch that the patient is wearing to say the medication has been taken, and the patch then does the communication.  There are no details on exactly what the chip in the pill sends; from a big picture view, it could be a simple signal that tells the patch "I've been swallowed", but that only works if it's the only pill that has been taken.  If the person is taking multiple drugs, it might be good to send the drug name and dosage. 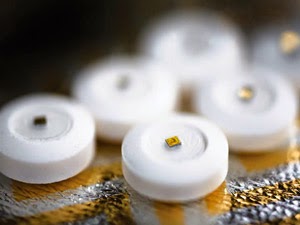 While I've heard the often-cited statistics that large numbers of seniors forget to take their medications (their memory is addled by the medications they're taking), this goes from Sci Fi to Twilight Zone for me.  Or even creepier.  I can only approve of this sort of thing if its voluntary and the person taking the pills wants the reminder.   If our liberty begins with the idea that we own ourselves, putting monitors into our bodies to report when we've done something is about as serious an attack on liberty as there is.  If you want to take the smart pill, be my guest; I just don't want it legislated or mandated.