Everyone knows the Rahm Emmanuel quote, and I'm sure it popped into everyone's heads with the lunatic fringe left saying Ebola is all the Republicans' fault because if they just let us have a surgeon general, this wouldn't happen.  Along with all the usual suspects (cough... CNN... cough MSNBC) chiming in chorus. The president, showing his usual approach, nominated an "Ebola czar" without a medical background, and no relevant experience: Ron Klain, whose only experience has been political, having been Chief of Staff to both Joe Biden and Al Gore.  Yeah, that's some qualifications right there. Plus, we're treated to the head of the NIH saying if those mean old Republicans hadn't cut his funding, why he'd have had an Ebola vaccine on the shelf and ready to use.  Riiiiiigghht.

There's a lot wrong about this stuff; in fact there's absolutely nothing right in any of that.

Let's start at the top.  Yo!  CNN, in answer to your "We need a surgeon general right now" piece.  We already have a surgeon general right freaking now.  Meet Acting Surgeon General, Rear Admiral Boris Lushniak, M.D., M.P.H.  RADM Dr. Lushniak served as Deputy Surgeon General from November 2010, until July 17, 2013, when he assumed the duties of Acting Surgeon General.  RADM Lushniak started working in the National Health system in 1983, right after getting his M.D degree and about the time controversial Surgeon General nominee Vivek Murthy was going into first grade (Murthy was born in 1977).  To say RADM Dr. Lushniak has much more experience than Murthy is a gross understatement; he has been an MD pretty much as long as Murthy has been capable of organized thought.

The problems with Murthy, though, only start with him being too young.  First, he hasn't really done anything noteworthy in his career (my interpretation of his background here);  he's just not distinguished enough to be Surgeon General at 37.  There's no "Murthy procedure" known by surgeons far and wide; there's no "Murthy test" that internists use to diagnose something.  He was never "Dean Murthy" of Prestigious Medical School (or Ordinary Medical School); he was never department head of any hospital, or chief surgeon or chief anything.  With the exception of being a little too far to the "Quackademic" side of medicine, he comes across as really ordinary.  He doesn't appear (to me) any more qualified than my own Family Practitioner to be Surgeon General, and probably not more qualified than my cat's veterinarian.

Murthy's really big problem is that he started down the "guns are a public health menace" rabbit trail and keeps pushing it.  That, naturally (and thankfully) got the NRA, the NAGR, and everybody else on our side against him.  Which, as night follows day, turns the narrative into "that nasty old NRA is getting another godlike Obama appointee blocked!", and "those evil Tea Party zealots like Rand Paul are keeping us from having a surgeon general!" - totally ignorant of the fact that we have a surgeon general.

So how does a rather ordinary guy like Murthy  get picked to be nominated at all?  Of course it's a trick question!  This is Obama: Murthy was picked for his political activity.  He was picked for starting Doctors For America, a money bundling, pro-Democrat/pro ACA group that helped lobby to get the ten pound turd of Obamacare passed!

Which brings us to the newly-appointed Ebola czar and former chief of staff for numbnuts Biden and "even numb-er nuts" Gore.  Because we absolutely need an Ebola czar.

Guess what?  We already have an Ebola czar, too!

Not ten years ago, the federal government created and funded a brand new office in the Health and Human Services Department specifically to coordinate preparation for and response to public health threats like Ebola. The head of that department is Dr. Nicole Lurie, who is still very much on the job - despite the fact that no one has mentioned her, no one has interviewed her and no one has brought her forward as the doctor in charge of the "emerging diseases branch" of the NIH.


As National Journal rather glowingly puts it, “Lurie’s job is to plan for the unthinkable. A global flu pandemic? She has a plan. A bioterror attack? She’s on it. Massive earthquake? Yep. Her responsibilities as assistant secretary span public health, global health, and homeland security.” A profile of Lurie quoted her as saying, “I have responsibility for getting the nation prepared for public health emergencies—whether naturally occurring disasters or man-made, as well as for helping it respond and recover. It’s a pretty significant undertaking.” Still another refers to her as “the highest-ranking federal official in charge of preparing the nation to face such health crises as earthquakes, hurricanes, terrorist attacks, and pandemic influenza.”

So why doesn't everybody know about Dr. Lurie?  You'll have to ask Obama about that.  Maybe his Top Men don't even know her office exists.  And maybe it has to do with corruption her office has been involved with (this is the Obama administration, after all):


There are a few interesting things about the scandal Lurie was embroiled in years ago. You can—and should—read all about it in the Los Angeles Times‘ excellent front-page expose from November 2011, headlined: “Cost, need questioned in $433-million smallpox drug deal: A company controlled by a longtime political donor gets a no-bid contract to supply an experimental remedy for a threat that may not exist.” This Forbes piece is also interesting.

The donor is billionaire Ron Perelman, who was controlling shareholder of Siga. He’s a huge Democratic donor but he also gets Republicans to play for his team, of course. Siga was under scrutiny even back in October 2010 when The Huffington Post reported that it had named labor leader Andy Stern to its board and “compensated him with stock options that would become dramatically more valuable if the company managed to win the contract it sought with HHS—an agency where Stern has deep connections, having helped lead the year-plus fight for health care reform as then head of the Service Employees International Union.”

The award was controversial from almost every angle—including disputes about need, efficacy, and extremely high costs. There were also complaints about awarding a company of its size and structure a small business award as well as the negotiations involved in granting the award. It was so controversial that even Democrats in tight election races were calling for investigations.

Last month, Siga filed for bankruptcy after it was found liable for breaching a licensing contract. The drug it’s been trying to develop, which was projected to have limited utility, has not really panned out—yet the feds have continued to give valuable funds to the company even though the law would permit them to recoup some of their costs or to simply stop any further funding.

The Los Angeles Times revealed that, during the fight over the grant, Lurie wrote to Siga’s chief executive, Dr. Eric A. Rose, to tell him that someone new would be taking over the negotiations with the company. She wrote, “I trust this will be satisfactory to you.” Later she denied that she’d had any contact with Rose regarding the contract, saying such contact would have been inappropriate.

So, let's review:  we don't need a surgeon general right now because we have one in the job.  The current nominee isn't being held up because "rethuglicans are mean", it's because he's not really qualified.  We don't need a new Ebola czar because we have one already, and while the one we have is only marginally qualified (largely by her experience), the one Obama nominated is completely unqualified.

The other big lie you hear now is that the NIH is underfunded.  This is the quote you'll come across:


“Frankly, if we had not gone through our 10-year slide in research support, we probably would have had a vaccine in time for this that would’ve gone through clinical trials and would have been ready.”- Dr. Francis Collins, head of the National Institutes of Health (NIH)

The slide, such that there is one, is caused entirely by the inflation the government is trying to create (through the Federal Reserve's QE).  I read that the NIH’s budget has increased from $29 billion in 2007 to $30 billion this year, which we'll call a cut because of the inflation caused by the Fed.  But that's overlooking an important fact:  vaccines don't just happen;  you don't just pour federal dollars in a blender and out pops a vaccine.  It's difficult, slow work.  In the last decade, the NIH has prioritized other diseases, principally AIDS, over Ebola; it's only natural when all the Ebola outbreaks in history have killed 1/1000 of the number killed by AIDS in 2012.  If you don't have infinite resources (which you never have) do you go after the big killer or the little one?  And don't forget all the insane stuff NIH has spent their money on: 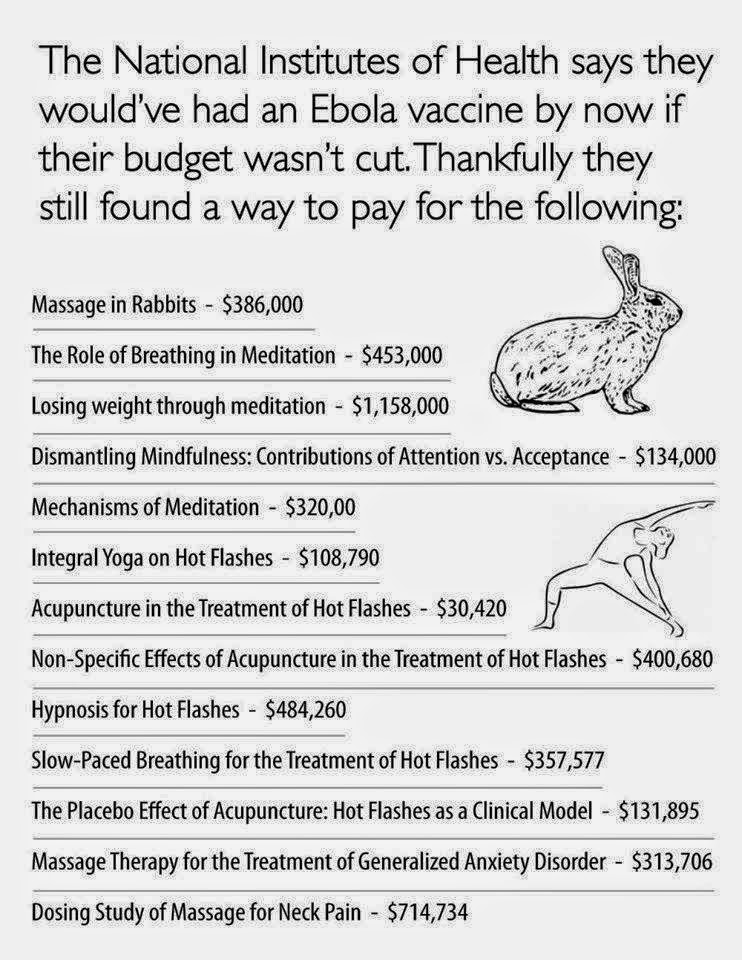 It looks like the NIH isn't underfunded so much as they're really poorly managed.

But looking at that list, does anybody else get the impression the NIH is full of fat, older lesbians having problems with hot flashes?