Climate Scientists and Gun Control Nuts Use This Tactic

Miguel at Gun Free Zone posts a link to Reason, where Grant Duwe, a well respected researcher on mass shootings, fisks a much-quoted study on mass shootings from Mother Jones (sorry, mama, no linkies).  It turns out they use the same basic trick climate scientists use to adjust temperatures.  They understate the number of shootings in previous decades to make the recent ones look worse.


The first problem with the Mother Jones list, which contains 67 cases, is that it significantly underreports the incidents occurring between 1982 and 2013 that meet its definitional requirements. The data I've collected show there were 114 mass public shootings, which means the Mother Jones list missed more than 40 percent of the cases that took place in the U.S. during this 32-year period.

The warmists do the same sort of thing in their data adjustments.  This story is about Australia, but the execrable James Hansen of NASA has done the same thing to the US.  And a little more.

Manipulation looks like this.  I combined the two graphics in that Reason article.  The top is actual numbers,  the bottom is what Mother Jones reported.   They make it look almost hockey stick-like. 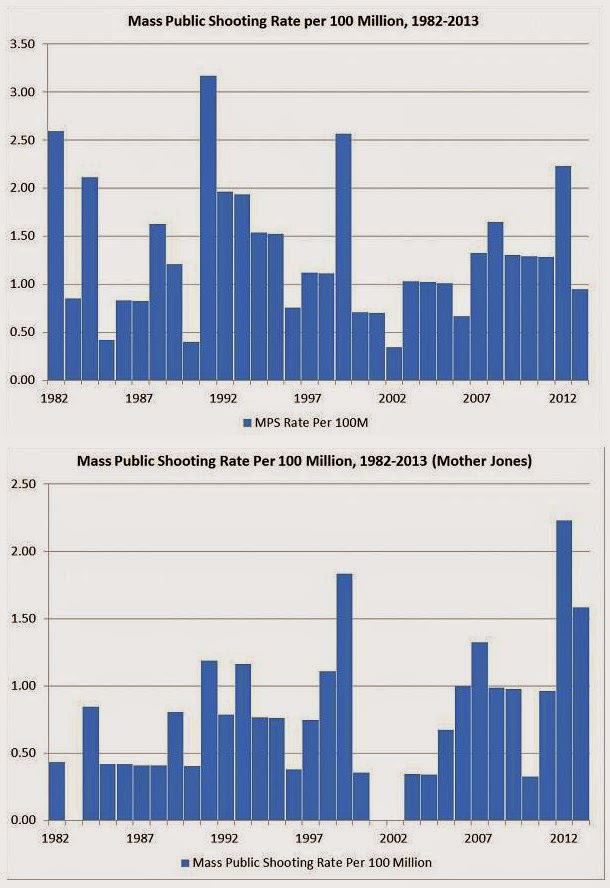