The Fed IS The Recovery and The Economy

Came across an interesting chart today with a good video explanation of what it all means.  First, the chart: 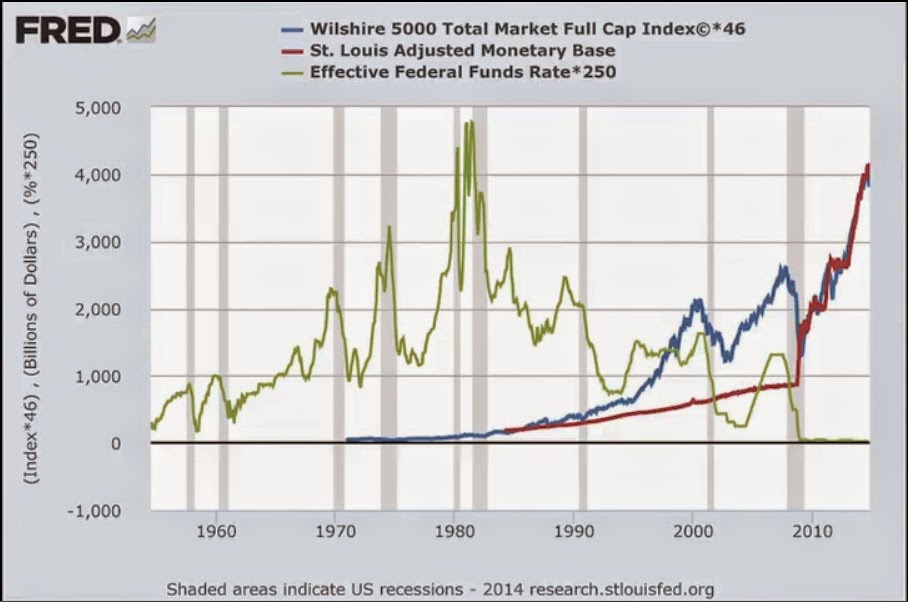 The raw data here is from the St. Louis Federal Reserve Bank, which has a nifty web site for extracting and plotting your own data.  This plots the Wilshire 5000, the adjusted Fed monetary base and effective Federal Funds rate.  The Adjusted monetary base, in red, is the amount of cash in circulation, in Billions of $.  The Wilshire 5000, plotted in dark blue, is another one of those indices of the stock market; this time the 5000 biggest companies on the NY Stock exchange, so 10x the size of the S&P500, and a really broad measure of the market.  In order to scale it so that it's proporitonal to the monetary base, the value of the index is multiplied by 46.  Finally, in a greenish color is the effective Federal Funds rate; and to scale it so that it looks like it's in basis points, it's multiplied by 250.  Are you good and confused?

All of the recessions since about 1950 are shown as vertical gray bars, and you can see that the Fed tried to lower the funds rate and stimulate the economy after each one - although they were always badly timed.

The point of this is most easily seen on the right side of the chart, after about 1990.  The bull market run up of the stock market and burgeoning economy are traced by the Whilshire 5000 (blue).  The adjusted monetary base is increasing, but slowly perking along.  The Fed funds rate hovers around 1000, dipping below in the recession of 1990 and then going to around 1500 (1 1/2%) through most of the decade.  Then comes the tech bubble pop, which leads into the recession of 2000 and the Fed dropping the funds rate to try to stimulate the economy.  Leading to the bubble/boom cycle starting in '02 and ending in the crash of '08.

That sets the stage.  Around late '08 to '09, you can see a dramatic change in the patterns of the chart.  The adjusted monetary base goes from poking along (at too high a rate for sane people!) to going vertical, an incredibly fast, almost infinite, rate of change.  Likewise you see the Fed rate drop to essentially zero, their famous ZIRP or Zero Interest Rate Policy, where it has stayed ever since.  And you can see the Wilshire 5000 and the monetary base going up in lock step.  In fact, the author says those two curves' correlation coefficient is 0.97.  A correlation coefficient of 1 is perfect and you basically never see that. I don't think I've ever seen one as big as 0.97.

Now notice the spacing between the gray bars.  Notice that they're always less than a decade apart?  Some of them are only two years apart (1980 and '82).  Now, they've been telling us that the recession has been over since '09, which says we should be running a really healthy economy right now.  Instead, what we see is that the Fed is creating money and that money is being used to pump prices: although this only shows the stock prices, the same seems to be happening for real estate prices.  Further, if the recession really ended in '09, we're five years out and therefore either midway, or less!, from the next recession.

Go watch that video.  You know how many of keep saying this isn't going to continue, that a really bad collapse is coming?  Look at that chart again: the Fed has already run interest rates to zero, what are they going to do next time?  They've already created about $3 1/2 Trillion.  What can they do next time?  Create 10 trillion?  $20 Trillion?  Direct deposit a million dollars in everyone's bank account?

It's nothing less than the death of the dollar.