I had said with some luck I'd have the machine in place and checked out by now. 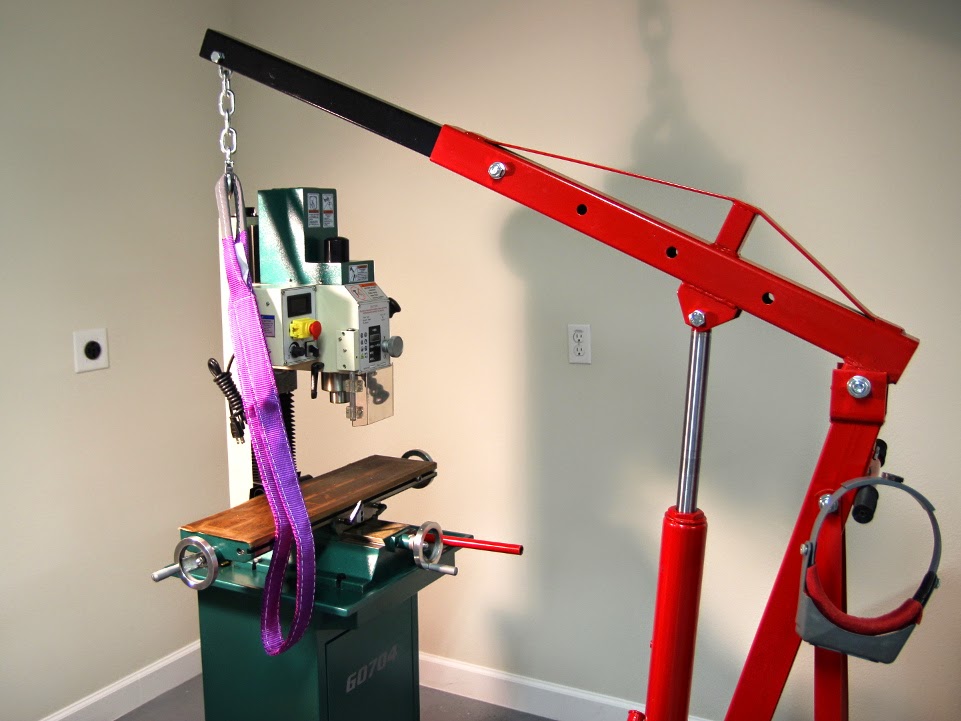 The mill is in place, the heavy shipping grease (like cosmoline) removed and all I have left to do is do the motor checkout.  The manual describes an hour test, running the motor at 600, 1000 and 2000 RPM for 10 minutes each, forward and reverse.  It says not to leave the room.

Everything went as planned, with really only one snag.  Assembled the crane, rolled it into the garage, lifted the mill out of the shipping crate, put it on the garden cart, rolled the mill over to near the stand, rolled the crane over to it, lifted and put it in place.

The snag was that the mill had four metric bolts of unknown size to mount it to the stand, and one of the holes in the stand wouldn't accept its bolt.  I thought it was misalignment - the threads on the bolt were boogered up and I thought it was from cross threading.  Lifted the mill again, repositioned everything and it still wouldn't thread.  Cleaned up the threads with a triangle file (I don't have metric taps and dies) - still wouldn't work.  I pulled a mounting bolt from the shipping crate, verified it was the same, and it wouldn't thread in.  Aha!  That meant the nut in the stand was the bad part!  The closest tap I had was 3/8-16.  Its threads would overlay the unknown bolt for almost half an inch.  With nothing to lose, I tried it.  Gently threaded it in a few turns past the part that wasn't smooth.  Voila, the mounting bolt now worked and I have the regulation four mounting bolts holding it down.

Not a bad day's work.  I think tomorrow we'll smoke a pork butt and make some pulled pork to celebrate.