Thanks to some comments on my Monday post, I got thinking about collecting some thoughts on antennas.  I've been a ham since 1976 and an RF (radio frequency) engineer (but not an antenna designer) since 1986, and along the way have used various antennas, both full size and smaller.  I hope this is useful.  For lots more about antennas than you can imagine, the ARRL Antenna Book is the standard ham's book.

Let's start at the beginning: why do you need to care about antennas?  We're surrounded by radios that don't seem to care what we use.  An FM radio with a whip antenna doesn't seem to care if the whip is fully extended or not, and a lot of folks will clip or twist a wire onto the end of it to try and get more distant stations.  If you're old enough, you remember putting aluminum foil flags on your rabbit ears - the TV antenna.  Our smartphones or cellphones are radios, and they don't have bulky obvious antennas (at least, not anymore).

It's the difference between receiving and transmitting.  Transmitting is about getting power out over the air over to a receiver.   A receiver cares about getting something into the first amplifier it can amplify.  In the case of your car radio, an AM broadcast radio or that FM radio, just getting some voltage is all it needs, and almost paradoxically, they don't need power, just voltage.  Those radios are designed with antennas as voltage probes to get a small amount of voltage (millionths of a volt will do) out of that miniscule radio frequency power going by. To get the most power out of a transmitter, antennas need to have the same impedance the transmitter was designed for, and just about all transmitters are designed for 50 ohm antennas.

The problem with saying you want a 50 ohm antenna is that they're only 50 ohms at one frequency, and you probably want to transmit in many places.  The reference 50 ohm antenna is a half-wavelength long dipole, usually made of wires.  (In theory, they're closer to 75 ohms, but in our environments  and the way we usually mount them, that value comes down.)  The length of a half wave dipole in feet is 468/f with f = frequency in MHz.  If you want a 40m dipole, then it's 468/7 or around 66 feet tip to tip.  You can do that for the 40m SSB and find a shorter antenna, so the procedure is to cut it for the part of the band you want.  You can also make a shorter antenna and tune it on frequency with electrical components.

All of which doesn't answer the question of how you'd transmit on any HF ham band with one antenna. The most direct answer is either an antenna with empirically found dimensions - I've heard good things about the "Carolina Windom" - or a simpler design with an antenna tuning unit.

I've personally used an off-center fed dipole with a 4:1 transformer in it for years, and the tuner built-in to my HF rigs (I think all Icoms with a tuner use the same basic design) allows it to cover the entire HF spectrum and even up to 6m.  I wouldn't hesitate to recommend this approach.  My 40m OFCD is 66 feet of wire, but instead of being attached to the transmitter in the exact middle, 33' and 33', it's fed at half of 33' (16'6") from one end, so that the long side is 49'6" long.  (Don't get hung up over exact dimensions: 17 and 49 will work just as well).  The feedpoint was hung from the side of my tower at about 18' up, and each end tied off after sloping down toward the ground.  Impedances ranged from 4 ohms on 80m up to over 100 ohms on 6m; the rig was perfectly happy tuning it and running full power.  An antenna analyzer plot of impedance magnitude, angle and SWR looks like this.  Ain't nothing 50 ohms about this antenna!  I've had literally hundreds (thousands?) of contacts with this antenna, including some pretty exotic DX on 40 and 30m. 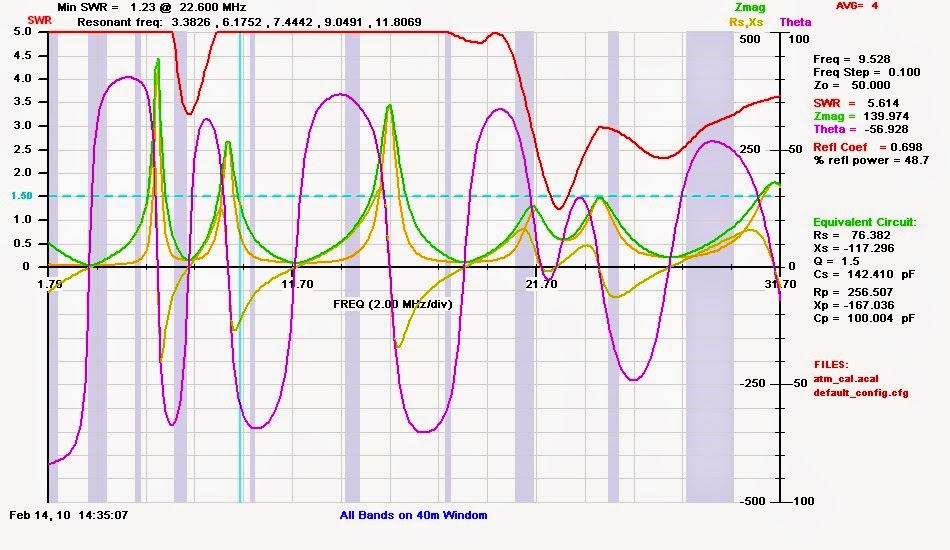 On a road trip playing QRP portable, I made a 17m dipole (18.1 MHz), about 12 1/2 feet on a side, and with an LDG Z-11 autotuner, I was able to operate all HF bands.  Even smaller than the home OCFD for easy packing.  I'm sure if you cut a dipole for a lower frequency it would work just as well for you with an autotuner.

Of course, there are lots of commercial options and while I've emphasized antennas I've built, you can pay someone to make the wire antennas for you.  I've bought some baluns so I'm not A/R about doing everything myself.  The point is not to over complicate things.  These simple, wire antennas will usually work very well if you get them in the clear.