DOT Earmarks Over $5B to a National Electric Vehicle Charging Network

Let me start out by saying that the headline over Electronic Design 's news page is "U.S. Earmarks $5 Billion to Create National EV Charging Network" and I added the word "over" - because the article adds adds this line in the second paragraph.

Of these funds, $4.75 billion will be distributed by formula to states. An additional $2.5 billion will be distributed through a competitive grant program that will support innovative approaches and ensure that charger deployment meets a number of priorities. These include supporting rural charging, improving local air quality, and increasing EV charging access in disadvantaged communities.

Since I take it as a given that anybody with an electrical engineering background (and most of their authors have such) is capable of recognizing at a glance that 4.75 plus anything more than 0.25 is more than $5 billion, I assume they're separate piles of money.  You know, the old idea that says money in your left pocket is different than money in your right pocket and not just all "your money."

The article reads like quite a bit of a press release, complete with a photo of Transportation Secretary Pete Buttigieg and Energy Secretary Jennifer Granholm, but it's full of all the legislative techno-jargon that you'd need if you're trying to comply with the new money giveaway. 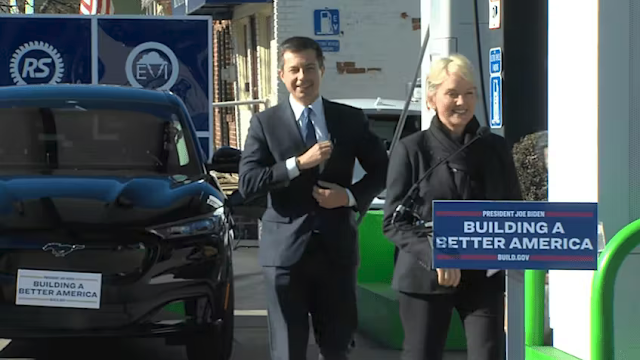 They note that the pair arrived in a Mustang Mocky (sorry one of my most favorite posts ever).  Make that a Mustang Mach-E.; the Electric Mustang.  I understand they made an electric generator to take advantage of how Carroll Shelby is spinning in his grave.

Of course, the emphasis of everything Brandon's team publishes is just how progressive they are.  It's the first National EV Infrastructure EVER (did anyone building gas stations near the interstate highway system ever get federal handouts?) and how much it emphasizes the "underserved" including people who live in apartments and can't charge an electric car.  Under what they're calling the National Electric Vehicle Infrastructure (NEVI) Formula Program, for which funding will be available this year, states must submit an EV Infrastructure Deployment Plan (IDP) before they can get any of those funds. A second, competitive grant program designed to further increase EV charging access in locations throughout the country, including in rural and underserved communities, will be announced later this year.  There are requirements that EV charging stations can't be more than 50 miles apart and can't be more than one mile from an Interstate.

Unfortunately, I don't see a single word about increasing the power grid's generation capacity to serve these stations.  The article never mentions where the charging power comes from, just what the EV charging stations must do.

Each station would need to have at least four fast-charger ports, which enable drivers to fully recharge their vehicles in about an hour.

The infrastructure bill, under which the EV charging station program is funded, also allocates $3 billion in competitive grants to accelerate the development of a North American battery supply chain. Furthermore, an additional $3 billion in grants is aimed at expanding the United States’ battery-manufacturing capabilities as well as establishing battery-recycling facilities.

Back in January, I posted a piece where I attempted to derive how much power capacity would need to be added to the national power grid if all cars went electric.  For budgeting big cars vs. small cars I went looking for battery sizes and found a spreadsheet of EVs and the median battery is 69 kWh (kilowatt*hrs).  My house isn't rated to a third of that.  That means those four fast charger ports will have to deliver 280 kWh.  Real life will say whether or not that number has to be continuously available all day or how many hours of the day, but I really doubt that the conventional gas stations around my town have that much service.  Where does the power to run these charging stations come from?  I'd bet money that at the very least impact end, the power utilities need to run new cables and the upper end runs to needing to build new generators.


Like I said in that January article, the answer for how much more power the grid would need to generate depends largely on your assumptions, but I think that in the range of doubling to tripling seems to come up on a variety of sites thinking about this problem.