The I-95 Traffic Jam and Electric Cars

As I'm sure you've noticed, this week's news has featured a traffic mess outside DC on I-95 where people were stuck for up to almost 24 hours in snow and cold.  People survived by running their engine intermittently to keep the vehicles warm.  People who are in the habit of keeping some blankets in their cars along with water and maybe food were better set to survive and there are stories of some of them sharing their supplies.

An article headline on Watts Up With That got me thinking about how Brandon's Build Back Better Bill has as a policy goal to get Internal Combustion Engines off the road.  If everyone had been driving a battery-powered Electric Vehicle, would this have been a mass casualty event?  Everyone knows that battery electric cars get a double whammy when it’s cold.  The heater runs on the batteries, which reduces the range, and the batteries lose capacity when it’s below freezing, further reducing the charge life.  Anyone in that traffic mess would have had to run the heat intermittently.

Something that has been a mental irritant has been the thought of how all those electric cars could be charged, but I’ve never seen numbers.  The energy to charge the batteries has to come from somewhere.  I just know I’ve read of both Elon Musk of Tesla and Akio Toyoda of Toyota Motors have said the power grid wouldn't support an all electric car fleet without serious upgrades.  A comment to that article had numbers I could use.  They said there are 289 Million cars on the roads in America and 1% are EVs, 2.89 million.  Let's put some numbers on this.  We need to know how big the battery is to determine how much it takes to charge it, and every car is different.  Time for some search engine research.

I found a spreadsheet of EVs and the median battery is 69 kWh (kilowatt*hrs).  There are other such spreadsheets, but I didn't find all the data that first linked spreadsheet had.  Because there are so many different sized batteries, exactly how big an impact on the grid there would be is “guesses all the way down” - rather than turtles.

Let’s start with 300 million total vehicles.  How often do they need to charge?  Depends on range.  That spreadsheet included range on a charge, and the median value is 259 miles.  That says the typical driver won’t recharge every day.  Some people will put that on in a week, some in a couple of days, some in more than a week.  For convenience, I’ll guess once every five days and say 300 million/5 days says 60 million cars will need charging every day.  60 million times 69 kWh is a 4,140 gigawatt increase (4.14 terawatts) on the grid.  How much is the grid delivering now?

The US Energy Information Agency says the 2020 US power grid produced a little less than that 4.14 terawatts; they say 4 terawatts, but there’s enough uncertainty in everything that goes into my calculation that it’s safe to say we would need to double the size of the power grid if every car was electric. 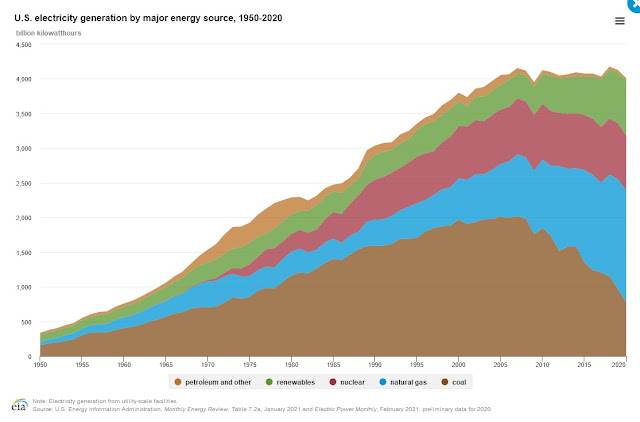 But wait, it’s worse.  That number inherently assumes (1) the batteries really are good for the kWh they’re rated, and (2) the charging is 100% of that number; that is, a battery rated for 100kWh really requires 100kWh to charge it - which implies there’s no inefficiency anywhere.  I think having both of those is impossible.  “In the old days,” a NiCd, NiMH or Lead-Acid battery was often charged at 1/10 of its capacity (10 hour discharge rate) for 16 hours – that’s 160% of its rating.  The spreadsheet I found has a column for the “promised” max power to charge the battery and another for the measured max power used.  There are batteries where the measured max power is less than the battery’s ratings which implies the battery doesn’t meet its ratings.  It’s trivial to find what percentage the max measured charging power is of the rated power.

The median measured max power is 1.80 times the rated kWh.  Multiplying that 69 kWh above by 1.8 says the power grid would need to deliver 7.452 terawatts.  Using the US EIA numbers again, that essentially says the generation capacity of the US power grid would have to be tripled.

Again, this is playing guessing games with spreadsheets and calculators.  I've got zero growth in the number of cars on the road, and that's probably ridiculous.  It might grow and I can imagine scenarios where it shrinks, but staying the same for years and years doesn't sound possible.  If more EVs are on the road, the power grid could go beyond needing to be tripled and need to be quadrupled.

While sanity checking my answers, I found an article on Reuters that talked about having 2/3 of the cars on the road being fully electric by 2050, a much lower bar than having no IC engine cars by then.  Their calculations said that the power grid would need to be doubled.  They provided a link to this graphic - I added the numbers in red. 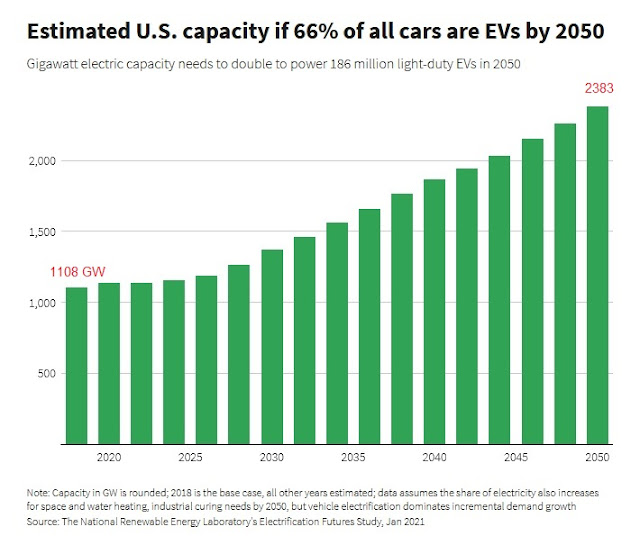 Their number for the total capacity for the grid starts much lower than the US Energy Information Agency's number, but for two thirds of the percentage of cars I calculate, they get a doubling instead of a tripling.  That sounds like it more or less agrees with my numbers.