On Wednesday, Elon Musk tweeted an animation of a recovery of a Super Heavy Booster using the giant robotic arms on the Orbital Launch Integration Tower.   I can't embed the animation here, so you'll have to watch the whole 24 seconds of video on Twitter.  This screen capture, 15 seconds in to that 24, shows the booster hovering between the two "Chopsticks" and during the animation, you can see the chopsticks closing. 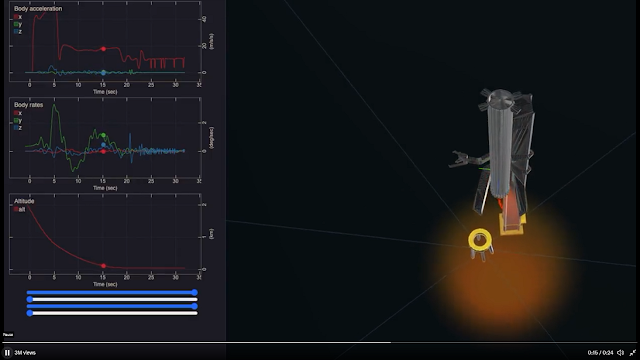 As we've talked about several times, the way the Super Heavy is going to be recovered is very different from the highly successful Falcon 9 recoveries in the details.  The Falcon 9's Merlin engines can't throttle back far enough to allow the booster to hoover while Super Heavy will be capable of hovering.  Because of this, SpaceX does what they call a suicide burn.  That means to fire the engine at the right time so that the air speed reaches zero when the legs are just reaching the deck.  Yes, some number of Falcon 9 boosters have hit the deck hard enough to require new landing legs, or parts of legs.  At 103 successful recoveries, that appears to be remarkable engineering.

But they don't want to hover.  They want something closer to the suicide burn.  The longer they hover, the more fuel they burn and the more fuel they burn, the more extra fuel they need to leave in the booster and that reduces payload to orbit.  The whole explanation of why they took the landing legs off the Super Heavy was to save weight in the vehicle so they can carry more payload.  If they're too gentle in the landing design they're going to throw away the weight savings.

We're coming up to some interesting points in the design over the next few months, where they're going to really discover if the rocket behaves like the simulation.  More to the point, as they do this a few times, they're going to discover if the simulations really show that they're saving enough weight in landing legs to add a few percent to the amount of payload they can carry.