James Webb Space Telescope Has Made it to L2

A full 30 days after its Christmas launch, the James Webb Space Telescope made it to its target, today, slipping into a large orbit around the L2 Lagrange point, around 900,000 miles from Earth. 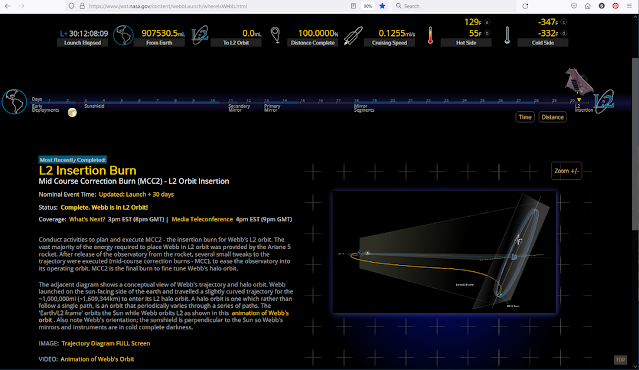 The geometry of the orbit is hard to visualize, especially when it comes to figuring out what Webb is going to be able to observe.  With that large heat shield that has to always face the sun, as the satellite orbits the L2 point, it will essentially be able to trace out a swath of the sky perpendicular to the direction to the sun.  Over the course of six months, it will be able to view every part of the sky, it's just that the motion is peculiar.  This video helps show what the paths look like.

The progress of the ten billion dollar observatory has been nothing short of reassuring that these groups can do amazing things.  But the telescope isn't ready yet and one of the most daunting tasks lies ahead, optical alignment or collimation.  If you've looked at any pictures of the telescope, you've seen that it has a very obvious hexagonal pattern on the big, primary mirror. 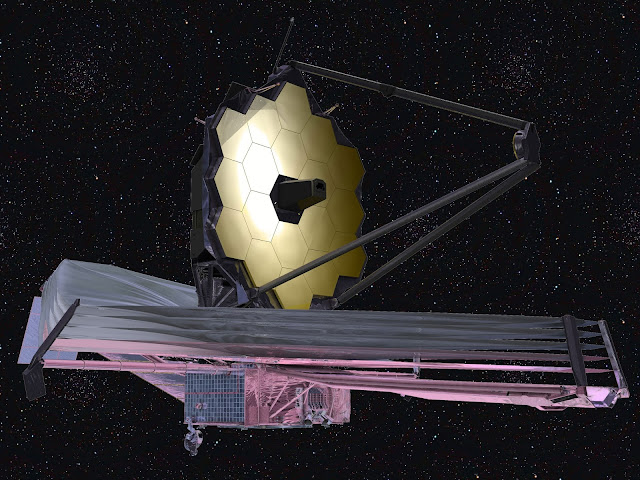 That's not quite right, though.  The hexagonal tiles are the primary mirror, or at least they combine to become the primary mirror.  Each of the 18 tiles is a separate mirror and they need to be physically aligned very precisely to create one huge primary mirror.  The design and fabrication of multiple mirror telescopes like the Webb has been studied since the 1980s (at least) and before giant hexagonal mirror tiles there was a Multiple Mirror Telescope in Arizona that used six circular mirrors.   Since the MMT, the largest telescopes in the world have used primary mirrors like the Webb's.  The first were the William Keck telescopes #1 and #2, which at 10m aperture were the largest telescopes in the world, until recently.

Like the Keck telescopes, each mirror in the primary of the Webb will have several actuators.  One will primarily move the mirror forward and backward, while others will tilt the mirror forward and backward along different axes.  In use the surface of the mirror tiles will have to be within 1/20 wave of light of the perfect curve, at shortest wavelength the telescope will be used for.  While Webb is designed for long wave observation (infrared), longer wavelengths than the Hubble Space Telescope, I believe it will be capable of some observations of short wavelength IR, implying every tile will have to be within about 1 millionth of an inch of its ideal position.

This afternoon's teleconference about Webb making it to L2 said that this process combined with simply letting the instruments on the "cold side" of the heat shield cool to as close to absolute zero as they'll get, and then taking calibration measurements with their various instruments, will take until June or July.  At that point, the Webb should start going through its program of observations to make.