Back in December,  I passed on the news that small satellite launcher Astra was going to start launching from Cape Canaveral Space Force Station and then later heard the announced test date was to be yesterday: Tuesday, January 18th.

As yesterday approached, I started to get suspicious that it wasn't going to happen.  An important sign was that Astra had never been shy about posting their test flights from Alaska, but there were no YouTube videos announced with a date to watch.  A local TV channel's newscast had two videos from last Friday and Saturday.  The older video said Tuesday was the day, the video from the next day said keep watching the station and they'll tell us when a date gets announced.  After watching the two videos, I took it to mean no launch yesterday, but I left my 2 meter HT (ham radio) tuned to the local repeater that usually streams launches without hearing anything through the three hour launch window. (1:00 to 4:00 PM EST).

The unexpected launch that I heard about over the weekend was SpaceX was going to put up another batch of Starlink Satellites Monday night, 7:26PM.  Third week, third launch, to reuse that idea.  Monday's weather was bad and SpaceX scrubbed the attempt early in the afternoon on Monday, announcing the new launch time would be 7:02PM Tuesday.  About 15 minutes before that, when their video feed typically starts up, they slipped that to 9:02PM.

The countdown and mission went flawlessly after that and we were treated to a beautiful launch passing nearly in front of the nearly full moon, captured here by Richard Angle for Teslarati: 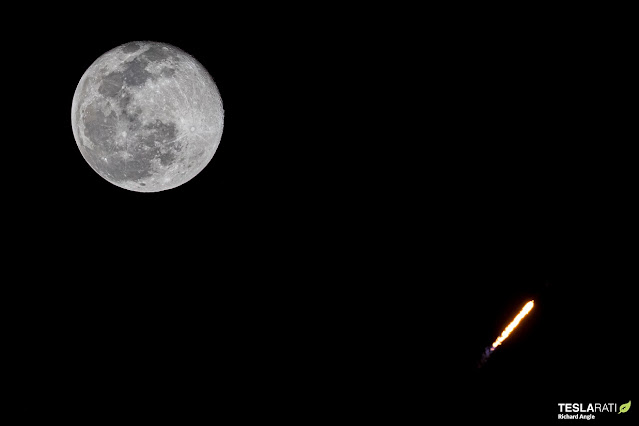 The feature of the launch was that this was the 10th launch for the booster, which then successfully landed in the "X ring" of drone ship A Shortfall Of Gravitas.  ASOG was off the NE of the Bahamas like the first launch of the year.

Booster 1060 joined the 10 launch club, like B1058 last week, prompting Eric Ralph of Teslarati to find some fun numbers for us.

For B1060, it was the booster’s tenth successful spaceflight and orbital-class launch and landing, making it the fourth Falcon 9 first stage to cross that milestone since May 2021 – and the third in the last four months. B1060 accomplished the feat faster than any of the three boosters before it, supporting ten orbital-class launches in a little over 18 months just five days after Falcon 9 B1058 crossed its own ten-flight milestone in 19 months.

More significantly, B1060’s success means that four boosters have now launched 41 times total and supported 40 of 73 Falcon launches completed by SpaceX in the last three years. While responsible for ~55% of all Falcon launches in that timeframe, those 4 boosters represent just 20% of the 20 boosters SpaceX launched at least once in the same period. That extraordinary accomplishment helps make it clearer than ever what a fleet of rockets capable of reliable recovery and reuse are truly capable of.

Four boosters launched 41 missions.  How does that play out with the rapid launch cadence of more than one launch per week that SpaceX has been keeping up in January?  The first paragraph says there's around a two month turnaround time for a booster after recovery: 1.8 months for B1060 and 1.9 months for B1058.  That says there needs to be enough "fresh" boosters for two months worth of launches.  Seems like eight to 10 boosters would cover that.  Fudge a number of spare boosters you're comfortable with and remember we have to consider boosters for Falcon Heavy flights as well; it seems to me the number of boosters has to be around 15.  Eric Ralph's second paragraph says they used 20 different boosters in the past three years.

Sounds like they may not need to make more boosters until some of the older ones start getting too expensive to refurbish.

SpaceX has another two launches scheduled this month for a monthly total of five: Italy’s CSG-2 Earth observation satellite nine days from yesterday's launch;  no earlier than (NET) January 27th.  That will be followed by Starlink 4-7 NET January 29th.  Quite a month.