The Only News I'm Seeing Out of SHOT Show

The only news I'm seeing out of this year's SHOT show that means much to me, is that Defense Distributed has updated their Ghost Gunner 3 in anticipation of ATF outlawing home made guns in the coming months.   The upgrade allows the GG3 to produce full lower receivers from aluminum bar stock that can be bought from any metal dealer, which they're calling Zero Percent Receivers and highlighting with this color web site tagged, "The age of zero has arrived."

The video on the right is a commercial visible here.

The Ghost Gunner concept, and GG3 is really the third version of this machine, is a small CNC milling machine that has been specifically designed to machine bigger and bigger portions of a firearm receiver.  In making a dedicated machine, their emphasis was to make the machine require as little machining experience from the operator as possible.  The user puts the piece that's going to be cut in the machine and backs off while the machine homes itself, finds its starting points and goes through the G-code step by step until a receiver is finished.  The current website says it will produce AR-15, AR-308, AR-9 and 45, an AR00 (a new one on me), Polymer80, and 1911 receivers.  It will also do engraving and other common jobs for light milling machines.

Let me show you a graphic from their GG3 page and point out something. 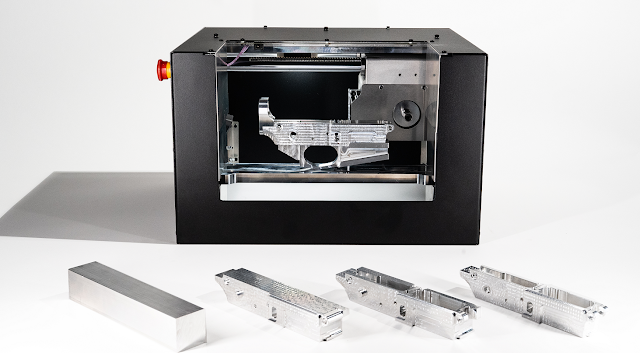 Showing a square bar of aluminum alloy and three more steps in the machining process down in the front, you'll note that none of those have the general shape of the finished receiver shown in the machine behind them and that you're familiar with.  While I haven't seen it talked about explicitly, my conclusion is the work envelope of the machine isn't big enough to cut all of the features on a piece as big as the AR lower in the machine.  Looking around the website, I see that they sell kits of parts to complete your receiver, including one that looks like this: 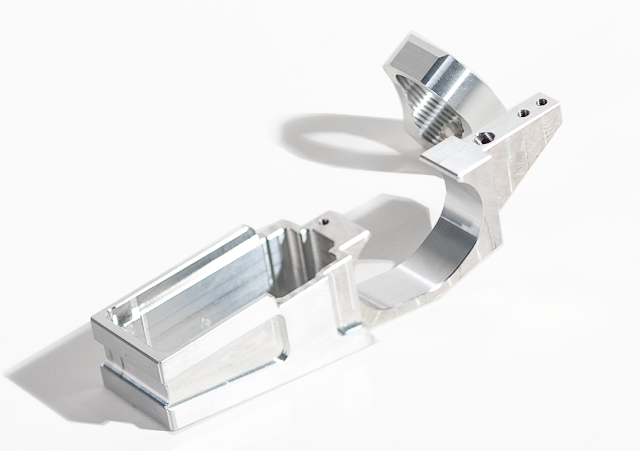 There are two parts there; the big one appears to be the "lower part of a lower receiver" after it has been made into two pieces so that it fits in the machine's work envelope.  The bottom of that piece, on the table top, is the bottom of what you're familiar with as the receiver.  To produce the receivers they can produce, they could either make the machine bigger and more expensive, or they could redesign the receiver so that it can be done in two pieces and assembled with hardware.  (The other, smaller part is the buffer tube mounting ring, which apparently screws onto the other half.)

There's nothing wrong with doing this.  It might all be in the direction of a good compromise, but the elephant in the room here is that this isn't like any other AR lower on the market.  That means that you won't be able to get parts from any other source for this receiver.  Hopefully, they'll have designed it so that standard drop-in triggers, bolt carrier groups, and all those others will work with this.

Defense Distributed, the company behind the Ghost Gunner machines and all of this is the company originally founded by Cody Wilson.  Cody is still associated with the company, and while I don't know what his official title is these days, he's clearly high on the food chain based on the interactions in this 15 minute video released to be in time with SHOT.  This whole jump into producing firearms from metal bar stock is based on the belief that the rule making proposals BATFE was pushing through last summer are about to become law and the whole personally made firearms support industry is going to collapse while everything is reclassified.  At the time, many joked if they outlaw 80% arms then there will be 75% receivers, and if that doesn't work there will be 70% receivers and so on.  I can see sales being effectively outlawed until parts are reconsidered.

Somewhere in there, it assumes there's some reasonableness in the agency, which isn't a safe bet.  After all, what the whole push seemed to be about was outlawing anything that's convenient.  If buying a Polymer80 "Buy Build Shoot kit" was a problem but buying the Polymer 80 body from one place and the Glock parts from somewhere else wasn't, they just wanted to make your life difficult.  Wilson is jumping over that hurdle by assuming there will be no such thing as completing an 80% lower again.  In which case, get a small milling machine and be prepared to make everything.  I'd like GG3 to be a bit bigger and more powerful, but there's that whole "picking a price point" argument that says the more expensive they are, the fewer people will get one.