How Strong Was That Tongan Volcano?

The world has been talking about the eruption off the island nation of Tonga early last Saturday (US mainland times) for the week now.  Every couple of days, I see a new story about how big this event was.  A friend sent me this story which seems to be well-sourced.

Titled “A nuclear-test monitor calls Tonga volcano blast 'biggest thing that we've ever seen',” it reports that an international group that monitors for likely atomic detonations has reported that at every one of their sites around the world - 53 of them - the infrasonic wave from the Tongan volcano is the largest thing they've ever measured, even bigger than the Soviet Union's Tsar Bomba, the biggest nuclear detonation in history.

This tweet by the World Meteorological Organization shows a graphic of the sound wave passing over to Slovenia, 15 hours after the eruption, at 10,500 miles from the volcano.  The article states it was heard by a monitoring station in Antarctica, at 10,000 miles. 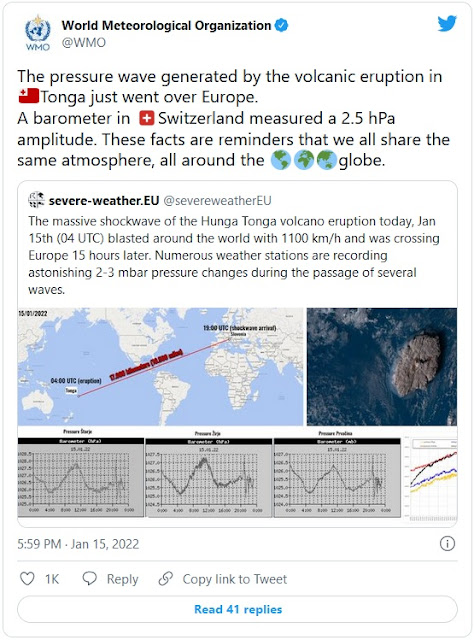 The WMO tops off their tweet with one of the most stupid things I've seen; "These facts are reminders that we all share the same atmosphere..."  A statement needed by only elementary school students and adults who forgot their elementary school science.  But let's ignore that.

The NPR article, though, includes a rather interesting fact I haven't seen anywhere else, though.

Even now, days after the eruption, ... the network can continue to detect the faint echo of the shock wave as it circles Earth's atmosphere again and again.

The article is dated yesterday, the 21st, so let's be conservative and say the text was written the day before; that's still five days since the eruption and the echos are still circling the Earth.

According to Ronan Le Bras, a geophysicist with the Comprehensive Nuclear-Test-Ban Treaty Organization in Vienna, Austria, which oversees an international network of remote monitoring stations,

... atmospheric measurements in Austria, roughly 10,000 miles from the eruption site, detected a shock wave that was 2 hectopascals in strength. By comparison, the largest nuclear weapon ever tested, the Soviet Union's Tsar Bomba, generated a shock wave of just 0.5-0.7 hectopascals in New Zealand, which sits at a comparable distance from Russia's nuclear test site in Novaya Zemlya.
...
Le Bras declined to predict just how big the volcanic eruption in Tonga was, citing the CTBTO's rules against estimating the size of nuclear detonations. But Margaret Campbell-Brown, a physicist at the University of Western Ontario in Canada who uses infrasound to study meteors as they enter the atmosphere, says she thinks it was at least as large as the 50 megaton Soviet test in 1961.

"A very rough back-of-the-envelope calculation suggests that the energy was around 50 megatons," says Campbell-Brown. "We haven't done the real analysis that it would need, but it doesn't seem like it would be smaller."

Other estimates of a how big an atomic blast would be comparable are very much smaller than the 50 megatons being talked about here; about 6-10 megatons, and the article talks about why that might not be a reasonable estimate.

As reports begin to make their way out of Tonga, we've been reading of people rendered deaf by the sound from the explosion, which makes sense when they start talking about 50 megaton explosions.  The dry land portion of the volcano, called Hunga Tonga-Hunga Ha'apai, is gone.  Nothing remains above sea level.  There are reports of ash covering much of Tonga itself, interfering with the availability of drinkable water.  To make things worse, although relief flights have tried to get in from Australia, the Tongan government has been afraid to allow more relief over fear of Covid.  We'll let you die of dehydration from no water, but we'll keep you from getting the virus!"

In some portion of your mind you have filed away that nearly 2/3 of the Earth's surface is underwater.  The vast majority of that is in the oceans.  That means the vast majority of volcanoes that could do this are under the oceans, too.  It might be that only a tiny fraction could create this sort of blast, which raises the questions of whether or not we know where they are, and if we have some way of monitoring to know if they're going to do this. 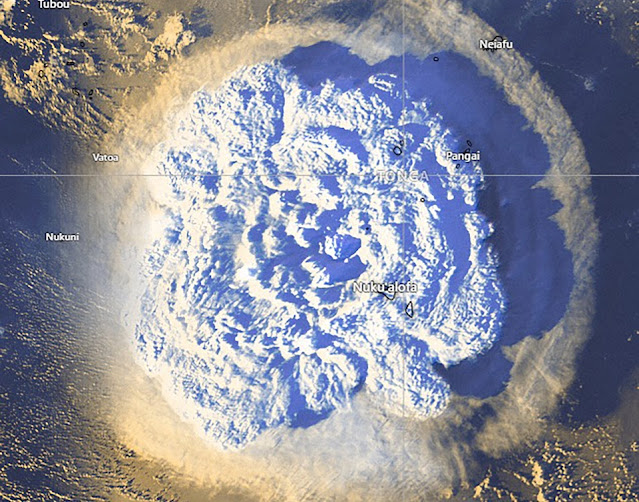 The volcano explosion as seen from space.  Credit: EPA, H/T to the Sun (US edition).