The News is Focusing on the Wrong Biden Quote

As usual, I suppose.

Everyone is fussing over the exchange where Biden called Fox News reporter Peter Doocy a "Stupid son of a bitch."  I wasn't aware until I read that article on a link from Divemedic's Area Ocho of what should really be the story there.   First, from that article linked first here:

After Biden complained that all the press questions were about the military buildup around Ukraine, Doocy shouted, “Will you take questions about inflation? Do you think inflation is a political liability ahead of the midterms?”

Thinking his microphone was turned off, Biden responded sarcastically, “No, that’s a great asset. More inflation.”

He added: “What a stupid son of a bitch.”

A bit later in the day, another link led me to this alleged Tweet from the White House that essentially says the same thing except with trivial word substitutions. 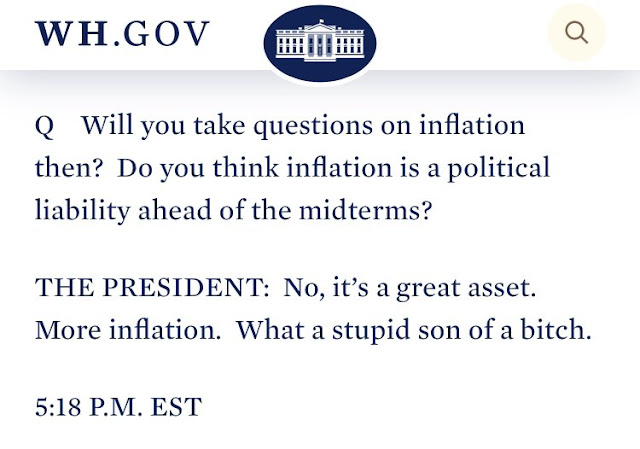 Considering the almost 100% agreement between the two reports, it appears that the deliberate inflation that everyone is suffering through is being maintained not just because of the Central Idiocy that is Central Banking, but because the moron in chief thinks inflation is a good thing for him and his party.  I've heard of (but not directly heard) him saying he'll make the minimum wage $15 without passing a law through congress.

As is always the case with inflation, nobody "benefiting" from the new pay is a penny wealthier from it and very likely gets hurt by it.

I've done this analogy many times before, but maybe let's do it again for your friends or others who really think they're doing better because their paycheck is bigger.

Imagine for the moment that what I'm describing is legal instead of something that could get you put in jail.  Imagine you could take a really "Magic" marker and just by doubling the printed value on the bills in your wallet, you actually made them double the "value."  A $1 bill becomes a $2 bill.  If you had a $2 bill it becomes a $4 bill (I know there is no such thing, but work with me here), a $5 becomes $10 and so on.

Those of us who were working adults during the crazy inflation of the 1970s know well that it can seem like everything just stays out of your reach as your pay goes up every time you're eligible for a raise.  The last number I saw quoted for inflation over the past year was 7%.  Shadowstats' calculation based on the same rules used in the Jimmy Carter days shows the year over year inflation to be 15% or 2.1 times the official 7%.

The Federal Reserve has said many times that they're committed to maintaining some inflation, basically because they're terrified of deflation, which they think will severely hinder the economy.  They believe no one will buy anything other than essentials if they think it will be cheaper in the future.  The unspoken corollary to that is nobody will save anything for the future if the money they save will be worthless in the future because of inflation, but they never seem to think that.

In my little analogy, you've just done conceptually exactly the same thing the Federal Reserve Bank has done; you've doubled the number of dollars everyone has and yet no one or nothing is better than before.  In effect, you've reduced the buying power of the dollar in half.  The Fed hasn't done a simple doubling of dollars, but they've been doing it since the Fed was created in 1913, 108 years.  This chart of the buying power of the dollar is dated from 2007, but the trend downward has continued.  It just needs to either be bigger, or use a logarithmic scale on the Y (vertical axis). 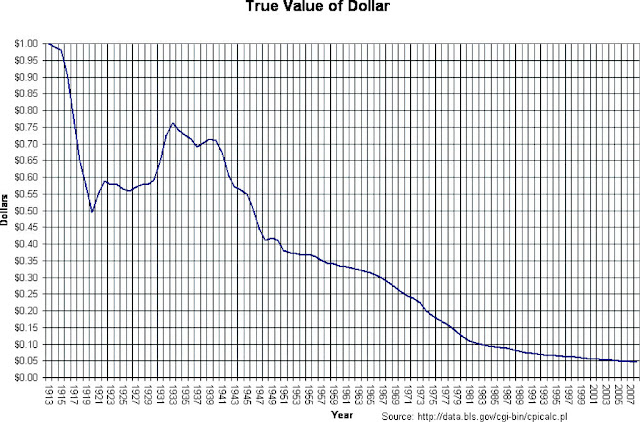 This says the buying power back in 2007 was less than a 5 cents in 1913 money.  When people talk about gold or silver going up or down, they're thinking backwards.  If gold is the "standard" the dollar is getting more or less valuable just like in that graph - although it has been a long time since the dollar went up in value, even briefly.  I think it goes without saying, but I'll say it anyway, the price of precious metals is set on an open market, which inevitably means the price is a function of how much buyers value it.  I'm not aware of a country in the world that actually uses a gold or precious metal backing for its currency.

It's worth asking who benefits from inflation?  Let's say you have loans for a fixed amount of dollars, like a mortgage.  If you have more dollars in five years because of inflation, your mortgage takes a smaller bite out of your pay.  To the bank they're not losing money, that's budgeted income and as long as it comes in all is well.  Any effects of inflation tend to be offset by new loans and other things (they sell mortgages to other companies all the time).  The banks, and especially the bigger banks, benefit because they get those freshly created dollars before they have an inflationary effect on the market.

Finally, the ones who get the most benefit are the Federal Government.  They sell bonds to finance all their expansionist crap and if they pay them back with inflated dollars, those are paid off.  Their tax revenues, in numbers of dollars, go up if the revenue goes up by inflation.  All of those promised payments they say they'll make (social security, medicare) that are tied to rate of inflation incentivize the Fed.gov cheating on the way they define inflation, which is why Shadowstats has calculations using the 1980 method and the 1990 method.  For years, people have said that the only way our national debt will be paid off would be by inflating our currency.  It seems to be a consensus that the debt is too big, and collapse is going to happen.  Is going to be by fire (hyperinflation) or ice (death spiral into depression)?  I've been writing about that since 2013 (second of two pieces by the same name).  The Great Reset seems to play into what's going on, too.