Author's privilege is that I get to boast about going out to my side yard and watching rocket launches.  Yesterday's launch was positioned perfectly for those of us south of the Cape Canaveral Space Force Station - perfection rivaled only by the weather giving us the ability to see it.  The first stage cutoff appeared to be almost due east of us; maybe a bit south but the elevation angle was so high that it was hard to tell.  We could see the cold gas thrusters firing little white puffs to turn the vehicle over and around so that it started falling to the north, back to CCSFS.  About this time the sound front reached us and we had a long listen to the rocket engines.  When the first stage fired up for the first burn on the way to landing, the entry burn, it was plainly visible.  With booster landings on one of the ships 400 miles away, we don't see that.  I think this is only the third time we've seen this, and I can see it's the second time I've photographed it.

"What goes up must come down," as they say.  The Falcon 9 on the way up on the left and on the way down a few minutes later.  We're not looking directly up the booster's skirt, it's actually pointed away from us (as I understand the geometry) but the plume gets pushed up around the booster by the atmospheric drag.  About a minute later we were treated to this view on the mission feed. 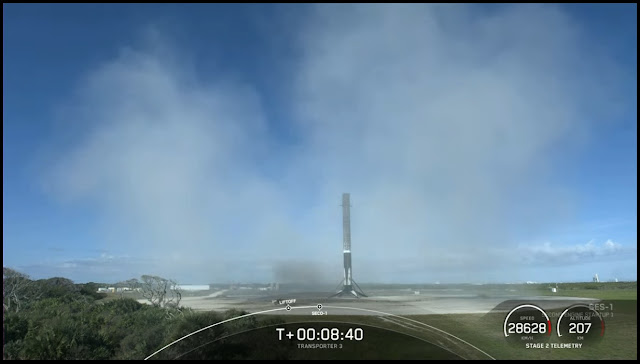 And a minute or so after that heard the sonic booms of the booster slowing down below the speed of sound.

Eric Berger at Ars Technica found a couple of fun facts about this mission and booster 1058 that I hadn't seen elsewhere.

Remarkably, this single Falcon 9 rocket first stage has now launched 550 satellites into orbit, as well as one Cargo Dragon and one Crew Dragon. It has flown, on average, every two months since its first launch. It would seem that rocket re-use is more than a fad.

No, rocket re-use changes everything.  B1058 is the third Falcon 9 to cross the 10 flight milestone.

Notably, this booster, number 1058, reached this 10-flight milestone in 594 days. The previous 10-flight rockets required 1,100 and 799 days, respectively. So SpaceX continues to bring down the time needed between reuse of each first stage, as Booster 1058 has only required about two months between flights.

Russia's Roscosmos is saying they're planning 30 rocket launches for 2022.

On Thursday, Roscosmos released remarks from its director general, Dmitry Rogozin, about space activities in 2021 and looking ahead to 2022. Counting a Europeanized version of the Soyuz rocket, Roscosmos completed 25 orbital launches in 2021. Of these, 14 took place from the Baikonur Cosmodrome, five from Vostochny, five from Plesetsk, and one from the Guiana Space Center in French Guiana.

Taking "great risks" ... For this year, Rogozin said, "We are planning about 30 launches of space rockets, with more than 10 of them commercial ones."

Gee, Russia,  who used to dominate world rocket launches, won't launch as many rockets as one American company did last year, or as many as China?  Ch-ch-ch-changes...

The good news continues to roll in on the James Webb Space Telescope.  While still nine days away from its destination at Lagrange point 2, and weeks away from being operational, you've probably heard that all the critical unfolding and other deployments have been successful.  This week we learned that due to the performance of the Ariane 5 launch vehicle, the telescope's life expectancy may well have doubled from 10 to 20 years.

NASA's Mission Systems Engineer for the Webb telescope, Mike Menzel, said the agency had completed its analysis of how much "extra" fuel remained on board the telescope. Roughly speaking, Menzel said, Webb has enough propellant on board for 20 years of life.

This is twice the conservative pre-launch estimate for Webb's lifetime of a decade, and it largely comes down to the performance of the European Ariane 5 rocket that launched Webb on a precise trajectory on Christmas Day.

As a preliminary report estimated, next Tuesday, January 18th, has been announced as the launch date for the next orbital mission of the Astra Rocket 3. The launch will be from SLC-46 on the CCSFS, No Earlier Than 1:00 PM EST with a window extending to 4:00 PM. Astra achieved orbit for the first time in mid-November last year, with a launch from Kodiak, Alaska.  The company had long said they wanted to be able to launch from a variety of places around the world, into a variety of orbits.  This latitude should be easier to reach orbit from than Kodiak's latitude!