The CEO of a supposedly private Space startup in China called OrienSpace granted an interview to a reporter on Twitter whom Ars Technica's Eric Berger considers a "go to source" on the Chinese Space industry.

[R]eporter Andrew Jones shares some information from an interview conducted with OrienSpace chief executive Yao Song.  The Chinese startup launch company—seemingly one of dozens—is planning a series of rockets beginning with Gravity 1, which combines a liquid core with solid rocket boosters. Intended for a first flight in 2023, the rocket would have the capacity to lift 3 tons to low Earth orbit. 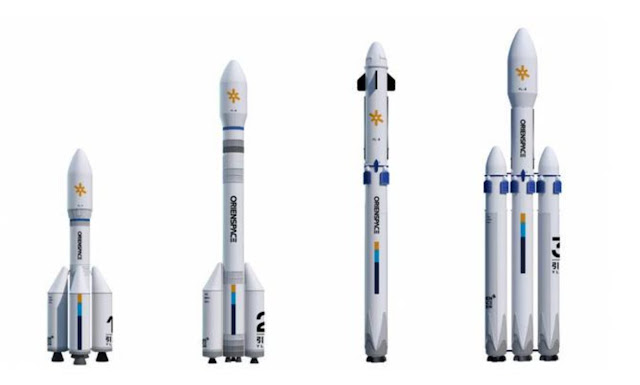 The descriptions start from the left.

Gravity-2 will be 50m long and also be solid-liquid combo and debut in 2024. Gravity-3 will be liquid and capable of recovery at sea, planned to fly for the first time in 2025. In 2030, Yao plans to start experimenting with commercial crew vehicles & explore space tourism... 2/5

As we know, the firm raised 400 million RMB (US$62.5m) in April. It has established a Beijing HQ, engine R&D center in Xi'an & will also establish a solid rocket assembly plant in Yantai, which is an hour or so away from the new Haiyang space port for sea launches. 4/5

You'll note there are no descriptions for the two on the right, which I'm assuming are Gravity 3 and Gravity 4.   Eric Berger adds this:

Wait, that looks like a ... But what caught my eye were the renderings of Gravity 3 and Gravity 4, shown in the image at the top of this article. Gravity 3 is intended to be entirely liquid-fueled and capable of recovery at sea. The company also hopes to experiment with commercial crew transport. And call me crazy, but doesn't Gravity 3 look a lot like a Falcon 9 with a Crew Dragon? And Gravity 4 sure looks a lot like a Falcon Heavy, right down to the landing legs. The Gravity rockets are not the first time we've seen something like this.

I thought the most striking thing about the resemblance to the Falcon 9 and Falcon Heavy was how both have what appears to be painted areas that resemble the landing struts on those two vehicles.  For a little fun, I modified the drawing a little, adding a couple of line drawings of the F9 and FH between them.  Scaled to come close to matching the sizes fairly closely.  The resemblances between the platforms are rather close, aren't they?  To be clear for the Extremely Anal Retentive, this is neither OrienSpace's or Andrew Jones' work; it's mine.  The starting points are OrienSpace's graphic and one on the history of the Falcon that I've long since lost the attribution for.  I believe it's from SpaceX themselves. 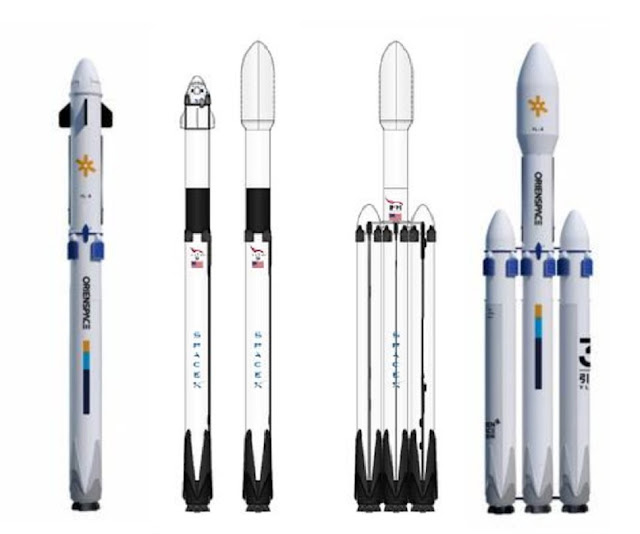 The grid fins on both of the OrienSpace vehicles are very evident and clearly patterned after the SpaceX models.

With SpaceX apparently looking at 50 to 60 launches this year, lifting SpaceX's ideas seems like a good way for OrienSpace to bootstrap themselves.  With China, a country that doesn't share the concept of intellectual property, we've seen ideas being purloined wholesale.