It has been virtually a month to the day since my last update.  It's not like I completely stopped working on it since then, but I had to stop working for longer than a day or two several times.  I've written several times about the biggest project so far this winter, the new antenna, but there are others.  Basically, as we come across some aspect of house maintenance that requires a lot of work outside, or with the doors open, we try to put it off for "when it cools off."  That's not always possible and the one I just started on, some rotten wood on a door frame, looks like I should have started in on that when we found it last May.  It looks like it might well go several days as well.

The cylinder isn't done, but I've overcome the big thing that was keeping me from moving forward, which was getting more repeatable measurements.  The thing that helped me to get more repeatable (more precise) measurements is this YouTube video from a guy called who calls his channel Abom79.  He demonstrates a technique that I was able to pick up with some practice, and dropped my measured value spreads to .0002 to .0003 inch.  Machinists refer to that as "2 to 3 tenths" but that's "tenths of a thousandth."  That decimal place means that a "tenth" is one hundred millionths of an inch.

The most important point is that a 1.000" bore is a target.  I'm not Gigantic Motor Car Corporation running two production lines, one making cylinders and the other making pistons, so that every piston must fit every cylinder ever made.  I fit the piston to the cylinder. 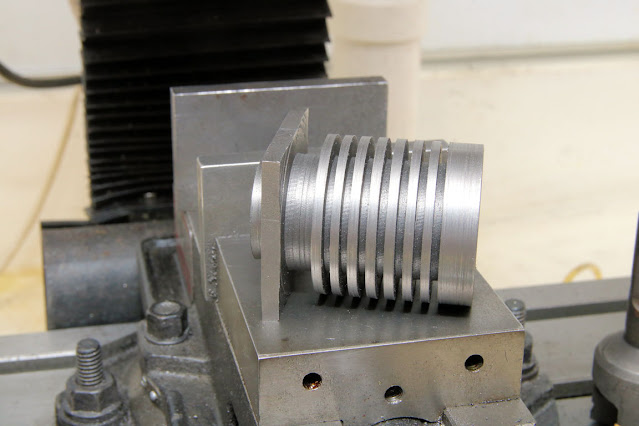 I did one operation since that picture, drilling the mounting holes in the square flange at the bottom (left).  They're not quite in a square pattern, the same distances from each corner in X and Y; they're in a rectangular pattern.  There are four more holes to drill and tap.  These are for four #5-40 screws and go on the right end in this view; those screws are how the cylinder head attaches.