To echo last week's title, and admitting this title format could get old, the second Falcon 9 launch of the year is set for tomorrow, January 13th, with a 29 minute long launch window opening at 10:25 AM EST, or 15:25 UTC from Space Launch Complex 40 (SLC-40) at Cape Canaveral Space Force Station.  Unlike last Thursday's launch, this is a rideshare mission called Transporter 3.  These rideshare missions remain a very low cost option for small satellites to orbit.

SpaceX has confirmed that the booster for this mission will be flying its 10th mission; B1058 previously launched Crew Demo-2, ANASIS-II, CRS-21, Transporter-1, and five Starlink missions, the last mission was on November 13th, making this a two month turnaround for the booster. Following stage separation, SpaceX will land Falcon 9’s first stage on Landing Zone 1 (LZ-1) at Cape Canaveral Space Force Station.  It's a different trajectory than landing at sea and ought to be covered well by the onboard cameras. 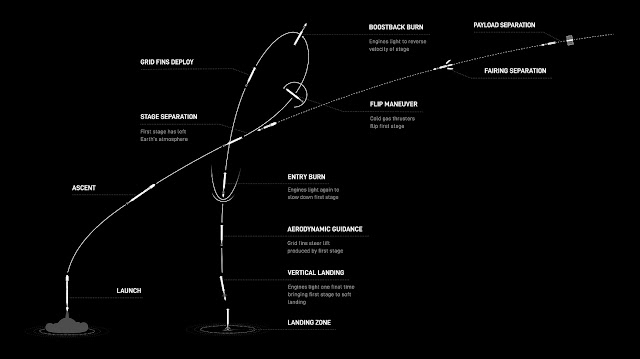 SpaceX graphic from their "Launches" website.  This will be gone from the website within a few days when the next launch gets close and replaced with the equivalent diagram for that mission.

Transporter 3 will be carrying 105 spacecraft (including CubeSats, microsats, PocketQubes, and orbital transfer vehicles) into a polar orbit, with a path that sounds similar to that flown by SpaceX for the SAOCOM-1B launch in August of '20.   That launch was ideal viewing for us; it flew almost overhead on the way south and the booster came back along the same path, allowing us to see the entire entry burn (the first burn) almost overhead.

As a side note, booster B1062 from last week's mission returned to Port Canaveral yesterday or last night, and showed no apparent damage, unlike the booster from the last mission of '21 in December.  B1069 had all four landing legs damaged as well as several of its Merlin engines.  All four legs of B1062 looked like they were undamaged and folded neatly into preflight position. 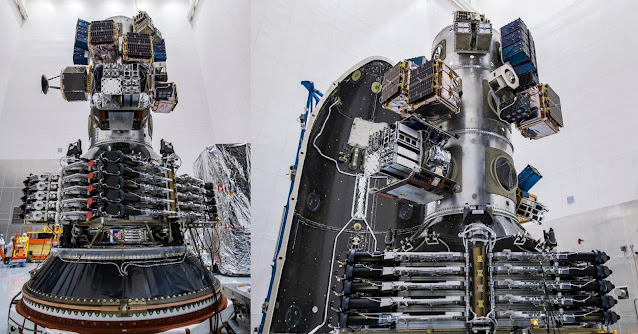 The Transporter 3 upper stage just prior to closing the fairings around all 143 satellites.  SpaceX photo.