Word got out yesterday that SpaceX almost lost new booster B1069 after last week's Cargo Resupply Services mission, CRS-24.  The news was mostly on Twitter, but was summarized for non-twits today by Teslarati.

As luck would have it, the only picture from this launch that I posted was the booster after landing on recovery drone Just Read The Instructions.  As you can see from that picture, the booster looks to have landed on the X-ring in the middle of the deck and appears to be in perfect condition.  This picture after the booster's arrival back at Port Canaveral tells a very different story. 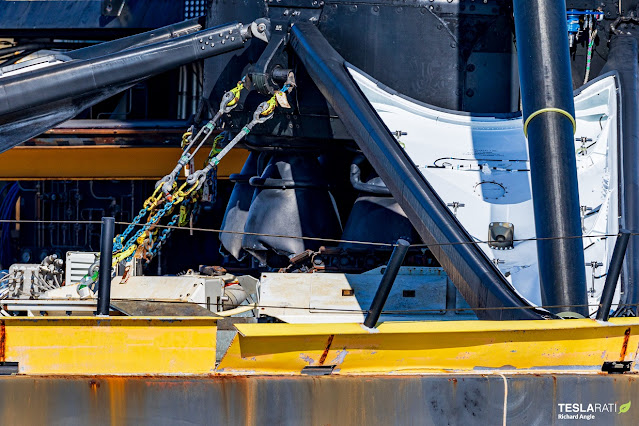 Photo by Richard Angle for Teslarati.

The first thing you might notice is the guard rail and fence on the deck of JRTI is bent out of position, apparently just barely keeping the booster from going overboard.  That bright yellow rail probably kept you from noticing the bells of the three Merlin engines that you can see are all heavily banged up.  The booster is tilted on the deck, and the landing leg closest to the camera appears damaged.  It's barely visible between the collapsing tubing extension and that brass colored fixture behind it, between the tubing and the left edge of that leg.  ("left edge" looking from this perspective)

This was said to have been caused by rough seas.  They also say the Octagrabber robot on JRTI was damaged.

From the ragged nature of the damage to those nozzles, it appears that B1069 somehow fell on top of the drone ship’s Octagrabber robot during or after its recovery attempt, as the creases would be far cleaner if the booster had merely landed hard and pressed its M1D nozzles against the deck. But a very short fall onto Octagrabber still doesn’t quite explain the apparent damage to one of the booster’s landing legs or the fact that it’s sitting lower to the deck than usual – both potentially indicative of a hard landing.

What is clear, though, is that SpaceX struggled to secure the rocket shortly after its first landing. Per the CRS-24 webcast, B1069 landed just shy of dead center. Likely as a result of poor sea conditions, SpaceX was unable to quickly grab the booster with Octagrabber, which uses giant clamps and its own weight to hold Falcon first stages in place. B1069 then clearly slid around drone ship JRTI’s deck at the whim of the ocean. Before SpaceX could secure it, the booster slammed into the side of the drone ship hard enough to partially flatten a steel safety barrier that runs along its port and starboard beams – a barrier specifically put in place to prevent wayward boosters from sliding off the deck.

An incident like this is where the economics of reusability really slaps you in the face.  Despite what looks like a large scale repair, the costs of utilizing the recovery drone ships, as well as the costs to repair JRTI,  it still looks like repairing this vehicle will be cheaper than dumping it in the Atlantic and building a fresh booster.  Published sources imply that replacing even all nine of the Merlin 1D engines will cost SpaceX in the vicinity of $10 million and it probably won't need all nine replaced (yeah, my guess).  My guess is it will total out under the price of a new Falcon 9 booster, which I've seen estimated at $25 million.

The bigger problem might be that they're going to need this booster flying.  Their launch manifest for next year has (unofficially) been predicted to be 40 launches, a 29% increase over last year's record 31.  Five of those are Falcon Heavy launches (!) leaving 35 Falcon 9 boosters and 15 Falcon Heavy equivalents for a total of 50 Falcon 9s - a 61% increase over last year.  While the difference between the two F9s used as the side boosters of a Heavy is apparently cosmetic, putting a nose cone where the payload adapter goes on orbital boosters, they've historically kept them separated.

Oh, by the way.  That 40 launch total doesn't include any Starlink missions.  Until Starship and Super Heavy are operational, Falcon 9 is the only way.  That could conceivably add as many as 20 launches to the manifest, for a total of 60.  More than one/week, with certainly some number from Vandenberg, but most from the Cape.

On its own, Falcon 9 launched six times more than the entire country of Russia last year and is by wide margins the most launched rocket in the world.