After last week's post, a few commenters said I shouldn't do the approach I outlined.  To borrow a vivid quote from Wandering Neurons (first comment as Anonymous):

Dollars to donuts, as soon as your mill hits that bar edge from the side, or the forces are the least bit uneven, the square bar will rotate out of the V-blocks and bounce around the room violently. More pressure from your vice jaws will only increase the bounce!

In my mind that bounce will likely be into something either expensive, hard to repair, or irreplaceable.  Probably painfully me.  So it was back to the drawing board.

I had already made my alternate vise jaws by that time, so I had two options: first would be to grab the block by the ends and cut down the pointed ridge with movements along the Y-axis.  The vise is just not quite big enough to handle the rough piece.  The second option would be to put the square blank in the vise along the X axis, clamped more securely, and try to chamfer it.  Unfortunately, I don't have a chamfer cutter, but I do have a large countersink (3/4" diameter) for metal cutting.  It cuts an 82 degree angle, and while I'd rather have a 90 degree countersink so that I cut a 45 degree chamfer this is rough cutting just to get rid of extra material and I think I can live with a 41 degree angle instead of a 45.

I decided to try the second approach and went off to make a test cut.  While making that cut the cutter slipped in the mill's collet and made a deep divot.  I was noticing that the cut was getting deeper toward the left in this view.  I was milling right to left (climb milling here) and the face that had been cut was definitely wider on the left.  It took embarrassingly long before I realized it must be the cutter slipping in the collet, took a quick look and saw that was going on.  I hit the emergency stop button on the computer which stops the axis from moving but not the spindle motor and then raised the cutter out of contact.  That divot you see got cut in the few seconds it took to stop the CNC, decide what to do, command it to raise the cutter and hit return. 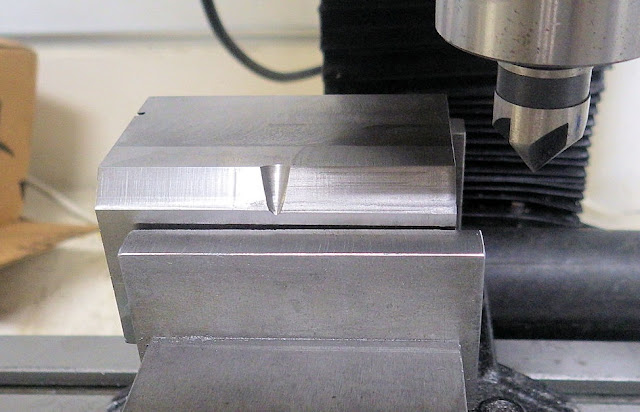 I don't think it's too deep, but frankly don't care.  The finished cylinder is going to look like this (except for some holes I haven't drawn in, yet).  If one or two cooling fins have a divot, it's a "don't care." 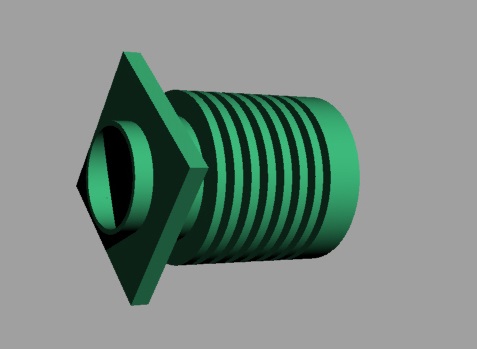 Unfortunately, the cut was done last Monday and I haven't had the time to get back into the shop since then.  What's that stuff about having no limits on time available once you're retired?  No need for a watch, no need for an alarm, all you need is to know when to nap and when to get up?  Sure hasn't been the case for me.