Planetary Scientists Starting to Grasp How Starship Changes Everything

Back in mid-November, I quoted and linked to an important blog post by Casey Handmer about Starship.  A couple of quotes in there are truly stunning (they stunned me) but he has blogged for years about exploring the solar system and has come to the realization that Starship is so much of a leap over the current ways of doing things that most of the groups who can get the most out of it just don't understand that.

A longer than usual article on Ars Technica offers some very reassuring information that they're starting to understand.  It starts out with something guaranteed to catch my attention: author Eric Berger re-tells a story I told last night from a different perspective.

Jennifer Heldmann stared at the computer screens on her desk, watching as a rocket's upper stage slammed into a crater near the South Pole of the Moon. In the name of science, a 2.3-ton chunk of steel struck the Moon with the force of 2 tons of TNT.

It was October 2009, and Heldmann tracked the impact from inside the Science Operations Center at NASA Ames in California. As a 33-year-old planetary scientist, she was working her first major mission for NASA by coordinating observations of the impact with ground-based telescopes.

After poring over the data, NASA declared that it had indeed found water in the vapor plume kicked up by the Centaur impact, as well as material ejected by the blast.

The discovery of water on the moon was paradigm-shifting for planetary scientists.  It had long been held that if life was to be found it would be on a body with water - or that had water.  For some years, planetary scientists had been finding ice and water all over the Solar System—on the ice-encrusted moons of Europa and Enceladus, on and beneath the surface of Mars, and potentially in even more far-flung locations, such as the interior of Pluto or Neptune's largest moon, Triton.  As they looked beyond Earth, scientists were beginning to discover water was nearly everywhere.  Maybe, instead of looking for fossils of life in dry lake beds on Mars, they could look for living things in the large oceans of Europa, Enceladus, and those other places.

We've talked about the Europa Clipper, currently projecting October 2024 launch on a Falcon Heavy, several times here.  As Starship has moved from lofty dream to real hardware readying for orbital flight, it's starting to attract the attention of planetary scientists.  Jennifer Heldman, from that moon mission is out on the forefront.

Imagine sending a lander to Europa, which harbors a vast, warm, subsurface ocean. During recent NASA planning meetings, scientists contemplated sending a complex spacecraft, costing billions of dollars, to conduct science on Europa. At best, they were hoping to land a payload of science instruments about the size and mass of a mini-refrigerator there.

With Starship, by contrast, NASA might land a cache of scientific payloads the size of a single-story unfurnished house.

"You can really take advantage of the Starship architecture and get to the outer Solar System in ways we haven't thought about before," Heldmann said. "It could provide a revolutionary new way of exploring these worlds."  [Bold added: SiG]

Earlier this year, NASA's group of planetary scientists began to recognize the urgency of getting the space agency on board with using Starship for science missions.  So they wrote a white paper (PDF warning), with Heldmann as the lead author, titled "Accelerating Martian and Lunar Science through SpaceX Starship Missions."

"NASA must develop a funded program aligned with the development approach for Starship, including a rapid development schedule, relatively high risk tolerance compared to traditional planetary science missions, and ultimately a high ratio of potential science value for the dollars spent if successful," the scientists and engineers wrote.

Starship's key differentiator is mass. Today, when a scientist plans a mission to explore another world, there are two big constraints: cost and mass. Starship may have some effect on cost by offering more rocket for less money. But the biggest change is that scientists will no longer need to be hyperfocused on mass. They can carry more instruments, more shielding, more whatever.

One of the reasons spacecraft for these missions are so expensive is the focus on both mass and trying to ensure mission success.  The drive for lower liftoff mass while still minimizing the risk of failure causes the price to skyrocket, which only serves to increase the pressure to ensure that for such a high price tag the mission must succeed.

Will NASA do anything to take advantage of the opportunities a fully operational Starship can bring?  It's hard to know.  NASA has selected Starship for the Human Landing System for the moon, but there's much more of the Artemis program that can be done directly with Starship, such as not bothering with the Lunar Gateway concept (which SpaceX will launch, also on a Falcon Heavy).  Aside from examples like this, though, NASA likes doing things with multiple bidders and international partners.

[E]ven if NASA's leadership decided it wanted to create a Starship-specific program for science payloads, it's doubtful that Congress (or perhaps even the White House) would go along. Members of Congress like jobs in their districts and states, and NASA's traditional contractors provide this. SpaceX, by contrast, focuses heavily on cutting costs and efficiency. It works in comparatively few states and employs fewer subcontractors.

Consider the Mars Sample Return mission. NASA plans to partner with an important ally in space, the European Space Agency, to launch a sample retrieval rover (developed in Europe) and an ascent vehicle, built for NASA by Northrop Grumman. This mission, launching no earlier than 2026, could perhaps fly on United Launch Alliance's Vulcan rocket. Then, a European-built return orbiter would launch on an European Ariane 6 rocket to bring the small cache of samples back to Earth.

Such a mission would likely have a broad array of political support because it would fund multiple US contractors and bolster ties with Europe. By contrast, a SpaceX-only mission on Starship would upset NASA's other contractors, the European Space Agency, and the politicians who back their interests.

In shorter form, the problems the planetary scientists face are political problems.  The agency is "old space;" an arthritic bureaucracy.  They're more concerned with spreading money around to different constituencies and the concomitant kickbacks to the right officials than achieving the best missions for the cost.  Changing that is an uphill battle.

Still, there are positive signs.  Today the agency has the Commercial Lunar Payload Services, or CLPS, program, which awards money to private companies to build spacecraft that can carry NASA payloads to the surface of the Moon. CLPS has awarded a half-dozen contracts so far to a diverse array of bidders (examples here) and has a total budget of $2.6 billion through 2028.  Why couldn't they "start small" and create such a program for Mars payloads?

Such an idea has already been proposed by scientists in the influential Mars Exploration Program Analysis Group, which suggested (pdf warning) that "a Mars-focused CLPS-like program could allow technology development for future exploration as well as delivery of science payloads."

Remember that comparison of sending a payload the mass of a mini-fridge to Europa with a conventional mission or a single story house with a Starship?  Starship is massive.  If ride-sharing is profitable for smaller satellite builders on a smaller launcher like Falcon 9, imagine a ride-share mission to Jupiter, carrying multiple rovers for which ever moon they land on, or different Jupiter observing satellites.  It could be a regular occurrence, perhaps every couple of years.  A Starship could stay on orbit around Jupiter as well, acting as communications relay back to Earth and lowering the cost of the various satellites. 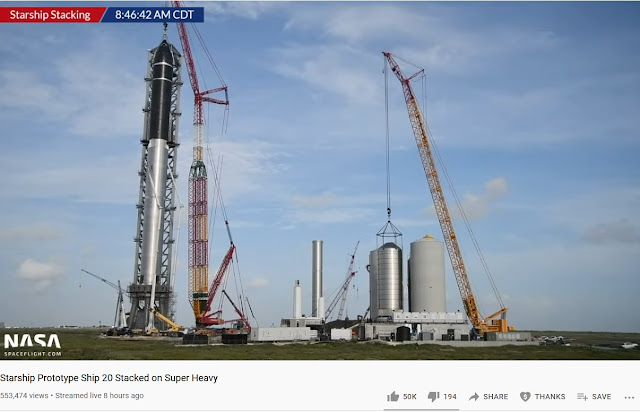 As long as this piece has been, it's just touching the surface of everything linked herein and the source article at Ars Technica. If this has been interesting, go read.