Central to the Artemis mission plans is something called the Gateway.  Missions to the moon won't go directly to the moon; they'll dock at the Gateway and then take a lander to the lunar surface.  Today, NASA awarded a contract to SpaceX to lift the heart of the Gateway to lunar orbit on their Falcon Heavy booster.


NASA has selected Space Exploration Technologies (SpaceX) of Hawthorne, California, to provide launch services for the agency’s Power and Propulsion Element (PPE) and Habitation and Logistics Outpost (HALO), the foundational elements of the Gateway. As the first long-term orbiting outpost around the Moon, the Gateway is critical to supporting sustainable astronauts missions under the agency’s Artemis program.

After integration on Earth, the PPE and HALO are targeted to launch together no earlier than May 2024 on a Falcon Heavy rocket from Launch Complex 39A at NASA’s Kennedy Space Center in Florida. The total cost to NASA is approximately $331.8 million, including the launch service and other mission-related costs.


The announcement then goes on to provide some background information on the mission.  The PPE is the power plant of the Gateway.  A 60-kilowatt class solar powered module which, "will provide power, high-speed communications, attitude control, and the capability to move the Gateway to different lunar orbits, providing more access to the Moon’s surface than ever before."

The HALO is the manned portion where the conditions for astronauts to live and work for short periods, typically on the way to the moon, will be provided.  "It will provide command and control and serve as the docking hub for the outpost. HALO will support science investigations, distribute power, provide communications for visiting vehicles and lunar surface expeditions..."

Think of the Gateway as a miniature version of the International Space Station; it's about 1/6 the size and won't be permanently manned, but the concept is an orbital base station around the moon. 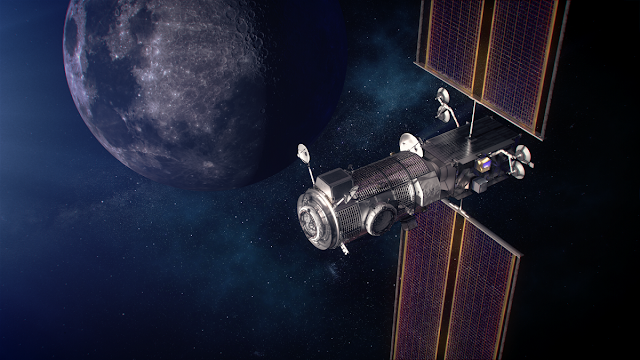 The Gateway has always been part of the justification for the SLS (Space Launch System) booster.  The plans have always called for "co-manifesting" the Orion spacecraft alongside modules of the Gateway onto a single SLS rocket, with its Exploration Upper Stage (EUS).  Without the enhanced upper stage, the Block 1 version of the SLS isn't powerful enough for such co-manifested missions, and the EUS development is behind the rest of the SLS - which isn't where it should be, either.

Today's announcement is the embodiment of principles in the 2020 NASA budget we covered here back in 2019, when the proposed budget recommended NASA consider alternatives like Falcon Heavy.

While close to the topic of the SLS, readers will recall the first attempt to static fire the core stage last month aborted at 67 seconds into a planned eight minute burn.  NASA is currently targeting the week of Feb. 21 for the next attempt at the test.  The test flight of the Boeing Starfire capsule, intended to carry astronauts to the ISS, is tentatively set for No Earlier Than (NET) March 25th.