The NASA/JPL team extended their record of successful landings on Mars this afternoon as the Perseverance rover landed at 3:55 PM Eastern.  All Mars landings are done autonomously because Mars is around 11 light minutes away from the Earth, making radio responses to command some maneuver arrive at least 22 minutes after they saw something they needed to do. The entire landing from the time they enter the atmosphere to touchdown is around seven minutes, making it impossible to pilot the spacecraft from Earth.   NASA famously refers to this as the "seven minutes of terror" because ground controllers can do nothing more than watch the telemetry coming back while hoping for the best.

In those seven minutes, simulated and subject to every Software Assurance test imaginable, they either successfully begin the mission, or spread a $2.5 billion work of art, engineering, and science across the surface of a distant and forbidding planet.

I found the summary that writer Eric Ralph at Teslarati pulled together to be a great perspective on those seven minutes.


The sheer insanity of injecting a car-sized rover into another planet’s atmosphere – with no prior braking of any kind – at around 10 times the speed of a bullet, deploying a house-sized parachute at supersonic velocities, and ultimately dropping that rover to the surface of Mars with a literal rocket-powered ‘sky crane’ is hard to exaggerate. The fact that that was what hundreds of the world’s smartest people concluded was the safest and most optimal architecture exemplifies just how extraordinarily difficult large-scale Mars landings really are.

This image captures the major milestones of the landing approach: 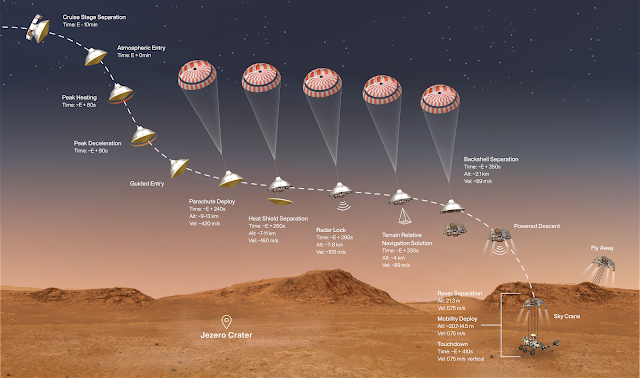 NASA/JPL-Caltech diagram of the landing sequence.

Note that at the end of the sequence, NASA uses the SkyCrane, in which part of the spacecraft separates and then lowers the rover onto the surface.  Once the landing is completed, the SkyCrane then flies away to dispose of itself.  This is only the second use of the SkyCrane method; the first was a sister Mars rover, Curiosity, still in operation on Mars.

Perseverance is an innovative and ambitious mission.  It's the largest rover ever landed on another planet at 1025kg or 2255lb.s and among the ambitious parts of its mission is that it is carrying a helicopter drone to experiment with being able to fly the first vehicle on another planet.  There will be a chemistry experiment to determine if it's possible to extract oxygen from the Martian atmosphere's CO2, and perhaps most ambitious of all is a plan to collect interesting looking samples and store them for a follow up mission in perhaps 2028 to 2032 to retrieve and return to Earth.

Within minutes of landing successfully, Perseverance took this image and sent it back to Earth.  We were warned it wasn't the resolution the rover will do, because the camera has a lens protector over it to protect it from dust and bigger pebbles scattered into the thin atmosphere, but here's our first look at Jezero Crater, where Perseverance will work. 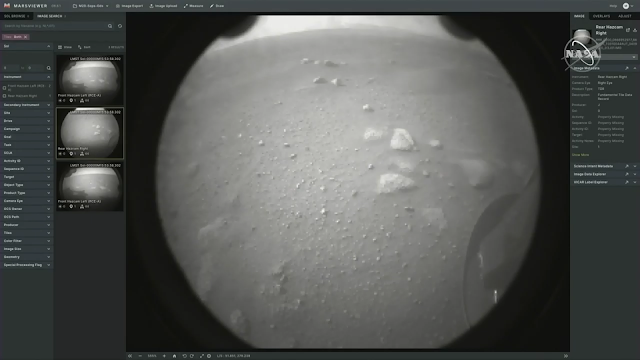