50th Anniversary of the Shot Heard 'Round the Moon

This past week was the 50th anniversary of the Apollo 14 mission.  If non-space geeks remember Apollo 14 at all it's because this was the mission that carried Alan Shepard to the moon.  Of course, he was America's first man to ever get launched into space in the first Mercury mission and then was grounded due to a condition (Meniere's disease) that causes excess fluid in the inner ear.  More than just being remembered for carrying Alan Shepard to the moon, it's remembered because Shepard brought a "smuggled" a golf club and balls to the moon, and is the first man to ever hit a golf ball on the moon.

It's really an interesting little story, brought to focus on Ars Technica because NASA has reprocessed the films from Apollo 14 and shows just how far he actually hit the golf balls.  Short and brutally honest version of the story: it's good he didn't quit his day job.  Just remember to allow for the 200 pound space suit he had to wear (although it only weighed about 33 pounds on the moon) which more importantly severely impacted his ability to move his arms.  He was only able to swing his makeshift club one-handed. 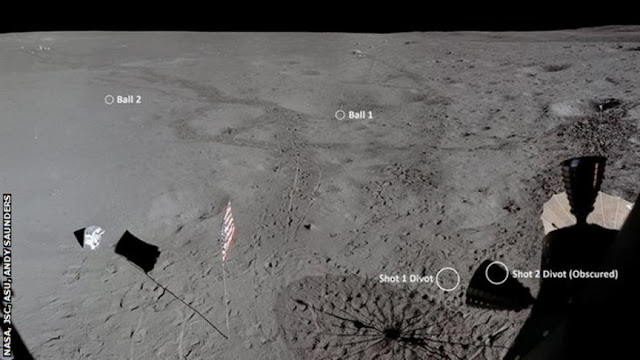 The story I never knew is that the original idea came not from Shepard but from Bob Hope.


The idea for Shepard's golfing stunt came out of a 1970 visit by comedian Bob Hope to NASA headquarters in Houston. An avid golfer, Hope cracked a joke about hitting a golf ball on the Moon, and Shepard thought it would be an excellent means of conveying to people watching back on Earth the difference in the strength of gravity. So he paid a pro named Jack Harden at the River Oaks Country Club in Houston to adapt a Wilson Staff 6-iron head so that it could be attached to a collapsible aluminum and Teflon sample collector. Once NASA's Technical Services division added some finishing touches, Shepard practiced his golf swing at a course in Houston while wearing his 200-plus-pound spacesuit to prepare.

The famous story that the clubs and balls were smuggled onto their Apollo craft is just legend from the time; Shepard has explained in an interview, that the story wasn't the case and the real background.


The astronaut ran the idea past then-NASA director Bob Gilruth, who was initially opposed but relented once Shepard laid out the precise details. Shepard also assured Gilruth that the stunt would only be done once all the official exploration tasks had been completed and then only if the mission had gone off without a hitch.

Everyone knows that the first Mercury Seven astronauts were test pilots and had a reputation for being jokers; all fighter pilots are stereotyped as wild jokers.  A story of astronauts in those days skirting the rules is automatically believed.

It took some fancy image processing, but both golf balls have been found during reprocessing and examining other image sources, such as from the Lunar Reconnaissance Orbiter.  While Shepard and others joked about him shanking his first attempt at a shot, when he connected better with the second shot he knocked it out of the view of the camera alongside him and said that it traveled for "miles and miles and miles."  In truth the first shot went about 25 yards and the longer one went about 40 yards. 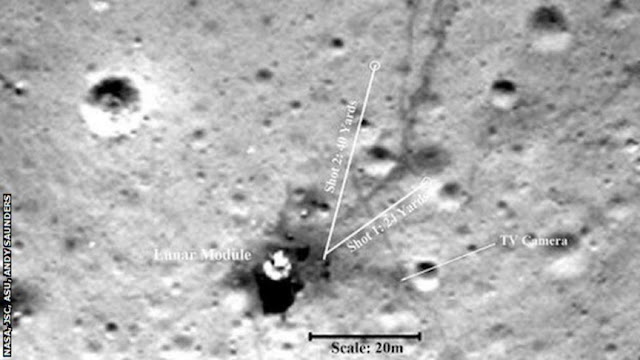 All of that just doesn't matter.  It was a heady, optimistic time.  We were making travel to the moon into boring routine, something that people only dreamed of for all of history.  Done with slide rules and computers that weren't within a millionth of the power of today's smartphone.