In looking back over my previous posts, I notice I never updated the stories about my little Webster Internal Combustion Engine after showing the modification I made to reduce the amount the cylinder was moving.  I concluded that story saying, "Does it work?  I don't know.  I haven't had the time to test it, yet."  In fact, it does work, as this video dated February 3rd shows.


If you compare this to the video posted on January 19th showing the engine running for the first time, the cylinder does lots of rocking back and forth in the first video.  In this video the rocking isn't perceptible.

Since then, I've done little with the engine and had zero success getting it to start easier and run more reliably.  The only thing I've done that had any degree of success is putting together a new way of starting the engine.  What I had been using was a compromise to get me going quickly.  One of the guys told me about his method, which involved using a body shop tool called a pin stripe eraser. These things are large rubber wheels that are literally erasers.  It works but it's very messy.  Look below the flywheel's right edge in this video, between the two clamps, and you can see a mess of yellowish powder.  That's the eraser dust.

The way most engine builders start an engine like this is with a pair of metal parts they make.  One is made for every engine and it's left on it.   It would help me explain to put the image here first. 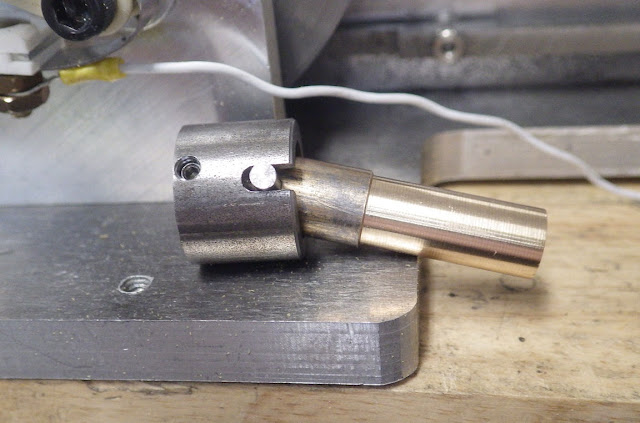 There are two parts.  The one on the left slides over the crankshaft and is held by a setscrew visible near the left side rim.  I've seen these called a starter spud.  It's essentially a cup; a piece of 3/4 steel bored out to 1/2" inside diameter and about 0.150" thick on the bottom.  The bottom is reamed to match the crankshaft and installed so that the crankshaft fills the reamed hole.  The piece on the right is a piece of bronze rod I bought for the engine turned down to just under 3/8" diameter on the right end.  The piece is cross drilled and reamed to a 0.125" hole for a piece of 0.125 steel rod pressed in place.  It's a tight press fit; I had to use my mill's vise to push the pin into place.

To use these, the right side (I call it the Tee) is chucked in a drill, (my line powered drills are faster than my battery powered drill) the pin fitted into the slot and the drill is run to crank the engine.  In my case, it's done from the side you're looking at, and cranked counterclockwise.

The good news is no eraser dust messing up everything.  The bad news is I still can't get the engine to start reliably and run better.