When Press Secretary Psaki yesterday echoed the literal party line that "trans rights are human rights" I wouldn't argue a bit.  I would argue however that it's fundamentally unfair to biological women to have them compete against biological men, regardless of whatever medical treatments they've had done.  Men who are undergoing treatment, or have undergone it, certainly have a right to compete in athletics, but they need to compete against other men transitioning to being women and not biological women.

Look, this shouldn't be controversial.  People have been studying this forever and Atlantic magazine (of all places) did a summary of results in 2012.  There's a slight complication that both men and women are getting better and faster, but the fact remains that there is a performance difference in athletics between men and women that remains almost unchanged.  In comparisons since around 1950, the records for women are close to 90% of the men's records. 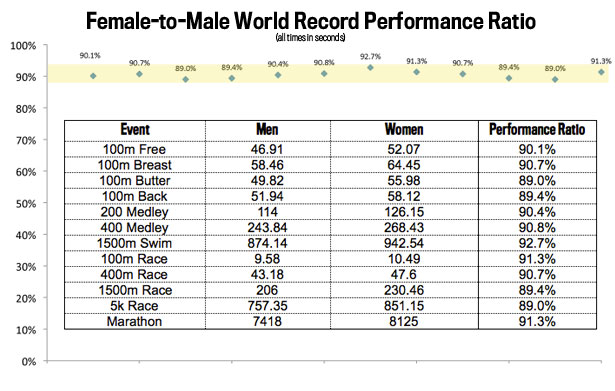 The big name behind several of these studies is Israeli physicist Ira Hammerman.


Hammerman spoke at the 2010 Wingate Congress of Exercise & Sports Sciences, and he found that this little-known ratio held across all sports.

Running. Swimming. Rowing. Kayaking. Short distance, long distance. Accomplished in teams or attempted alone.These are such diverse events, requiring different parts of the body and diverse types of talent. And yet they all share something: Their women's speed world records are all about 90 percent of their men's speed world records, in both short, middle and long distances.

Hammerman points out that as both men and women have gotten better and faster, women match the records men set decades earlier. The women's world record for racing the butterfly (swimming) in 2012 equaled Mark Spitz's 1967 record for men.

I've blogged many times about watching the Tour de France on TV every July, and still watch a few days out of the month (although since all of my favorite riders aged out of the Tour, I watch less).  The Tour has been running for over a hundred years and tons of records are available.   There has never been a woman competitive in the Tour.  There has been a women's Tour in some form or other since the early 1980s.  First called Le Tour de France Women; then Grande Boucle Féminine Internationale (Grande Boucle translates as Big Loop, a name the Tour has used), and other names.  Suffice it to say no woman has ever outperformed the men.  If women were capable of being competitive against the men, you can bet they'd be in big races.

Don't expect to see this data anywhere.  All the "Reality Czar" will tell you is that you're being bigoted by thinking what this data says.  They'll declare that there's no difference between trans women and biological women, without giving you actual studies to review.  But why listen to me?  Why not listen to a young woman who's being hammered by these rules?  Or you could read an old post around here on the same topic with some differences in emphasis.