Democrats Fight to Bring $15 Min Wage Back From the Dead

Earlier in the month, as talk about a $15/hr federal min wage was circulating, Biden surprised lots of us by signaling to governors that the wage hike likely isn’t happening.  Since that time, the die hard $15/hr advocates have been scheming ways of getting it passed even if Biden doesn't want it (or doesn't admit he wants it).  The latest gambit appears to be playing games with parliamentary rules in the Senate, as explored by Politico.


The budget tool that Democrats are using to steer Biden’s plan through Congress without GOP support, known as reconciliation, is laden with thorny restrictions waiting to ensnare the $15 minimum wage boost they've added to the next tranche of coronavirus relief. The wage increase is also running into strong headwinds from two influential Senate Democratic centrists, Joe Manchin (D-W.Va.) and Kyrsten Sinema (D-Ariz.), who are both resistant to enacting the sweeping policy change through the powerful budget process.

Did you get that?  The way they're going to try to push the min wage through is by sticking it in the $1.9 Trillion Covid relief bill, still languishing in the Senate.  Min wage clearly has nothing to do with Covid relief, but that's how they roll up there.  Anything to "never let a crisis go to waste," as Rahm Emmanuel famously opined.  The White House and the Evil Party senate leaders have been waiting to see how the Senate's parliamentarian opines on the wage increase and both Evil and Stupid party leaders are expected to meet with the parliamentarian tomorrow.

A separate, popular story going around this week has been the waste and political kickbacks already in the $1.9 Trillion Covid relief bill.  “The Wall Street Journal editorial board estimated that only $825 billion was directly related to COVID-relief and $1 trillion was “expansions of progressive programs, pork, and unrelated policy changes.” (ZeroHedge)

The Evil Party's problems are first and foremost with their own members who are not lockstep with the extreme left side of the party.  As that quote from Politico mentions, Joe Manchin (D-WV) says he won't go to $15 but might sign on to $11/hr.  Manchin has previously said that an $11 minimum wage hike, adjusted for inflation, would make more sense for his home state of West Virginia. The other problem is Kyrsten Sinema (D-AZ) who has said she's opposed to putting anything into the Covid relief bill that isn't Covid relief.


“What’s important is whether or not it’s directly related to short-term Covid relief. And if it’s not, then I am not going to support it in this legislation,” Sinema said in a telephone interview this week. “The minimum wage provision is not appropriate for the reconciliation process. It is not a budget item. And it shouldn’t be in there.”

I find it shocking that there's someone in the Senate who thinks the rules matter and aren't just obstacles to maneuver around like Non Player Characters (NPC) and other obstacles in a video game.

That's probably as meaningful a summary as I can provide.  Close to anything is possible in what they'll negotiate to increase the min wage; the Politico article includes perhaps a dozen possible things we'll see that various senators think could get by the parliamentarian.  Reliably RINO Senator Mitt Romney  and Tom Cotton of Arkansas talk about offering a higher min wage “while ensuring businesses cannot hire illegal immigrants.” (I thought this was already illegal).  Naturally Senator and Budget Chair Bernie Sanders thinks he's put a case together for the parliamentarian that will sail through and $15 minimum wage will be included in the Covid relief bill.  We'll have to wait to see how bad the results are. 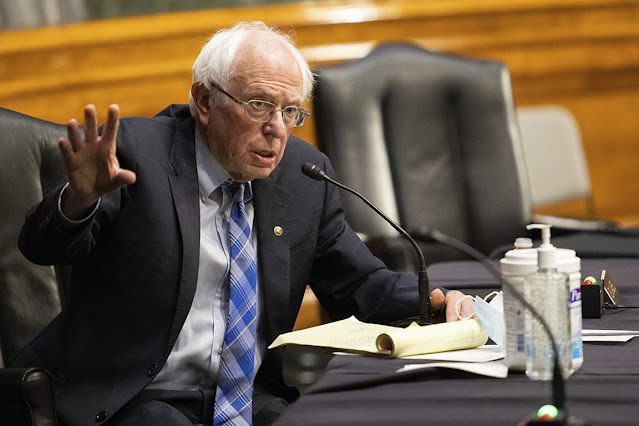