The Long March to Peak Stupidity

The first month of the Biden (Jo/Ho) administration has seen proposals, executive orders, and proposed legislation that's staggeringly out of touch with reality.  From the absurd ideas of making middle and lower class taxpayers pay for the college of the doctors and lawyers (let's be real, the highest amounts of college debt aren't from Starbucks Baristas with a degree in aggrieved minority studies, they're from professional schools) to killing off America's energy independence and lots of good paying jobs, to today's gun control nonsense, they just keep going farther and farther down the road to unreality.

I tell myself that they can't possibly be at peak stupidity yet because they've hardly started. Today, I see the latest bright idea is give a refundable tax credit of up to $1,500 on the purchase of a new bicycle.  Not just any bike, this is for an electric-motor driven bike, also known as an e-bike.

If you're a long term reader, you probably know I'm a cyclist; I don't talk about it much, but have posted on occasion.  While I've looked at e-bikes now and then and know a guy who rides one all the time, my bike is low tech: if I don't push the pedals it doesn't go anywhere.  My friend's bike is the kind that is electric assist.  If he doesn't pedal, it doesn't assist, and he used it to much benefit preparing for hip replacement.  Even coming from the bike world, this is a stunningly stupid policy proposal.


Authored by Congressmen Jimmy Panetta (D-Calif.) and Earl Blumenauer (D-Ore.), the Electric Bicycle Incentive Kickstart for the Environment (E-BIKE) Act supports the use of e-bikes as a zero-carbon transportation mode. Compared to other transportation modes, the bill recommends e-bikes because they are more affordable and accessible.

“E-bikes are not just a fad for a select few; they are a legitimate and practical form of transportation that can help reduce our carbon emissions,” Panetta said. “My legislation will make it easier for more people from all socio-economic levels to own e-bikes and contribute to cutting our carbon output. By incentivizing the use of electric bicycles to replace car trips through a consumer tax credit, we cannot only encourage more Americans to transition to greener modes of transportation, but also help fight the climate crisis.”

Where to start?  How much do you want to bet that Congressmen Panetta and Blumenauer come from districts that have e-bike manufacturers, or have other incentives?  Second, e-bikes are not "zero-carbon" transportation.  The energy that charges the batteries is coming from the power company.  Is it natural gas?  Is it coal?  Owners have no control over that.  But look a little deeper.  Even my bike, powered by me, isn't zero-carbon.  I give off carbon dioxide all the time, and more when working harder riding the bike.  An e-bike would be lower in carbon emissions than a car, but it's not zero.

Although I've seen many tables of calories per hour a cyclist burns, depending on speed (and a host of assumptions), I've never seen numbers for the energy supplied by the rider and the e-bike to compare to the car.  When I first returned to riding as an adult in the early '90s, there was factoid spread around that the average bike rider riding 15 miles would burn around 600 calories, while a car would burn about 15,000.  That implied the car would burn about 1/2 gallon of gas to go 15 miles - 30 MPG around town - a pretty efficient car.  My 11 year old Explorer doesn't get 15mpg around town, more like 14.  It would use over 30,000 calories to go 15 miles. I'd use more like 690 on my bike.

The bill would create a refundable tax credit up to $1500 for 30% of the purchase price of a new e-bike (that maximum credit is on a $5000 bike).  Note that says e-bike and specifically does not include tax credits for a human powered bike.  An e-bike isn't carbon-free, it's just lower carbon.  The energy to get someplace comes from somewhere.  It either comes from petroleum products, those same petroleum products converted to electricity, or it comes from the rider's body, converted from food.  They're trying to bribe people to give up using their cars by giving them some cash.  For a more modest bike, like this one, a quick check tells me the credit would be $780.  That check starts looking less good when it has rained, or snowed or any other sort of inclement weather. 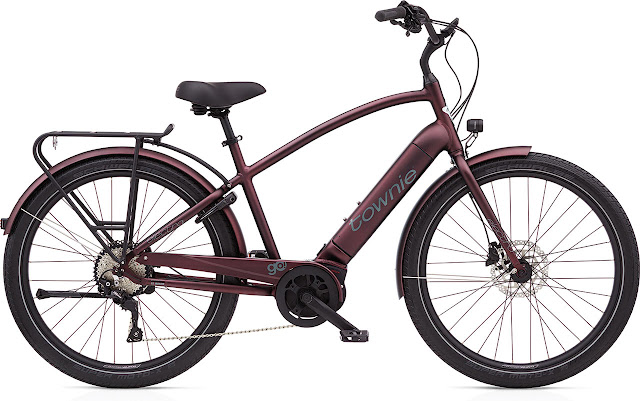 A Townie Go! now from Trek Bikes, one of the most popular brands and models of e-bikes (although I gather this picture is an older model.  Just grabbed a stock photo.)  The battery pack (where it says "townie") is less obvious than the models that have a large, black plastic battery pack there.

It's a dumb idea based on the concept of a Weather Tax that I've dismissed years ago.  The only thing the idea has going for it is that the real cost will probably be low.  There will be a few people who take advantage of it but I can't imagine it will be many.