Why Did SN9 Explode? Elon Musk - "We were too dumb"

I think it's refreshing when a chief engineer says, in effect, "why didn't I think of that?"  As reported on Teslarati and elsewhere, in the aftermath of the SN9's test flight and belly flop impact last Monday, Elon Musk went back to Twitter, where this exchange took place. 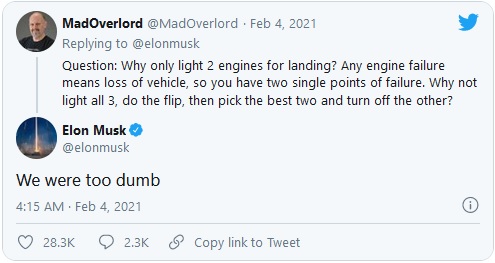 It's very easy for an engineering team to get stuck in the trap of, "we've always done it that way," and that has the predictable side effect of making people stop thinking of whether there's a better way or not.  It's a cliche in Continuous Improvement classes to say if you're doing something because you've always done it that way, you should stop and reexamine it. SpaceX has only been around about 15 years, but given their successes with the way they revolutionized orbital boosters, I can imagine a certain amount of that attitude might have set in.  In this case, something along the lines of, "we know how to land boosters."

Back at the start of the year, in a previous discussion about landing the Starship Super Heavy booster, we talked about the details of thrust to weight ratios, and how even engines that can be throttled don't get the designers out of all the traps lying in wait.  These engines don't have a zero to 100% range - there's some minimum they can't throttle back below.


When the Falcon is returning to land, at the very last moments, a single Merlin engine can't be throttled back far enough to allow the booster to hover. They have to adjust the engine to reach zero velocity at zero height, which requires amazingly accurate knowledge of the booster's position in the real world.

If they're going to light all three engines, why not just leave them on all the way to the ground?  The Starship prototypes weigh far less than operational Starships will. They don't want the thrust to weight ratio to get too high; they want to slow it down, not let it climb again. 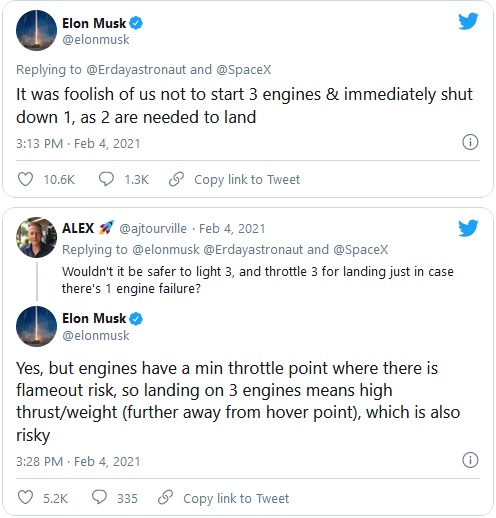 While a three-engine burn all the way to touchdown appears to be extremely risky or impossible for present-day Starships, Musk implied that there was nothing preventing SpaceX from reigniting all three engines during the initial flip and landing burn and using that time to determine the health of all three engines. If all three were healthy, Starship would shut down one for a soft landing. If one engine failed to restart or lost thrust shortly after ignition, the other two would already be active and able to take over.

Musk says that Starship SN10, already at the launch pad and likely days away from its first tests, will attempt to adopt that approach on an upcoming test flight expected as few as 2-3 weeks from now.

Admitting when someone, especially an outsider, has a better idea of how to do something you need to do is a sign of a very healthy mindset.  I suppose it's also a sign that the Chief Engineer isn't worried about being fired for not having thought of it!