When Landing Orbital Class Boosters Gets Too Routine...

You can accuse Elon Musk of a lot of things, but something you can't accuse him of is having no vision for the future.  As recently as 2014, NASA dismissed SpaceX's plans to recover Falcon 9 boosters.  Now, SpaceX has recovered so many boosters that they dropped their production rate; they simply don't need as many boosters, even with their launch cadence that's many times anyone else in the business.  As far as NASA and other Fed.gov agencies are concerned, they've dropped their policy of never flying on a recovered booster - even for manned flights.  While I'm still not tired of watching them do it, landing a booster on a drone ship hundreds of miles from any landmark has become routine.

As reported by Teslarati on Thursday, last Wednesday, Musk revealed that their plans for Super Heavy are changing.  Super Heavy, of course, is the booster for the Starships they've been protoyping.  They're considering not putting landing gear on Super Heavy and landing them as we're used to with Falcon 9 and instead catching them with the launch tower. 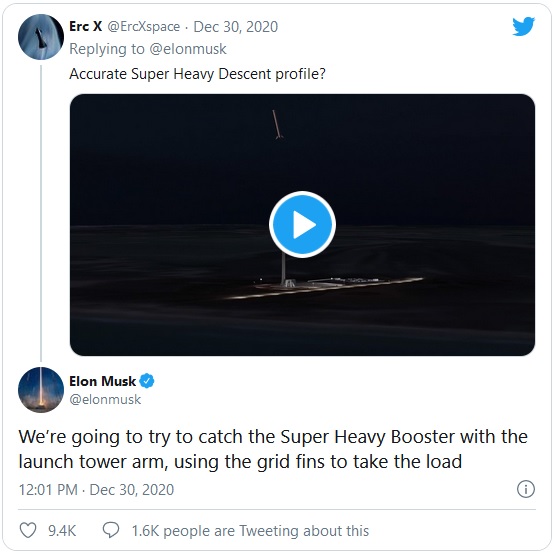 It's important not to lose track of what we're talking about here.  Super Heavy will be the largest rocket stage ever built – and by a large margin.  It will lift a ~300,000 lb Starship around 25% of the way to orbit, with a liftoff thrust of ~16.2 Million Pounds.  The booster alone will be 70 meters, around 230 feet, tall.  The Apollo Saturn V booster had a liftoff thrust of ~7.5 million pounds.  I don't have any references for what the Super Heavy should weigh when it's ready to be recovered, but the idea is to modify the launch umbilical tower to allow it to catch Super Heavy by its titanium grid fins.


Launch mount recovery would require unprecedented precision and accuracy and add a new element of risk or a need for extraordinarily sturdy pad hardware. However, the benefits would be equally significant, entirely eliminating the need for expensive recovery assets, time-consuming transport, and even the time it would take to crane Super Heavy boosters back onto the launch mount from a pad-adjacent landing zone.

In a way, Super Heavy has an advantage over the Falcon 9.  When the Falcon is returning to land, at the very last moments, a single Merlin engine can't be throttled back far enough to allow the booster to hover.  They have to adjust the engine to reach zero velocity at zero height, which requires amazingly accurate knowledge of the booster's position in the real world.  The Super Heavy is so much heavier than a Falcon 9 that it can hover.

Scott Manley does a great presentation on this.


This idea is wild, and full of risk, but could bring a lot of improvements to the Starship. Not having the landing legs will save weight, which moves into the payload. They are, after all, planning on building hundreds of these.

A few weeks ago, Musk tweeted that we should see Super Heavy fly "in a few months."  I don't see any infrastructure in the Boca Chica area that could catch the booster out of the air; I guess they have a few months to build that, too.

This has the potential of being a lot of fun to watch.  Word is they think they've fixed the issue that caused SN8 to crash, so considering how close to total success that was, Eileen's flight should be fun to watch.  I expect that next week (11th to 15th).