The Major Pieces Are in Place

The big lifting/moving in the shop seems to be done with.  There will be lots of smaller things moving around, and maybe some of the bigger things making smaller moves, like a few inches here or there.  I can't get you a view like the overhead views from the drawings, but I can do photographs.

Looking toward the left. 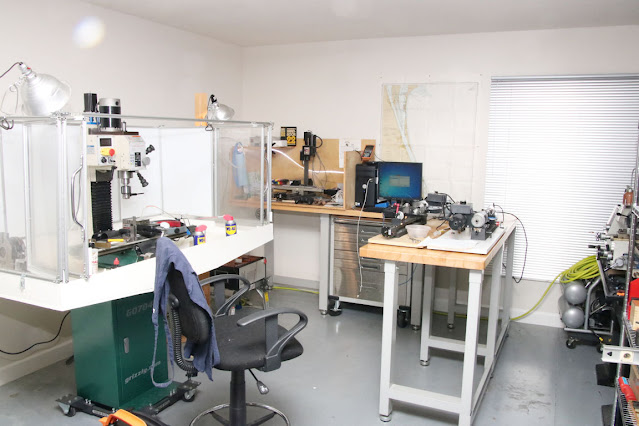 Looking toward the right. 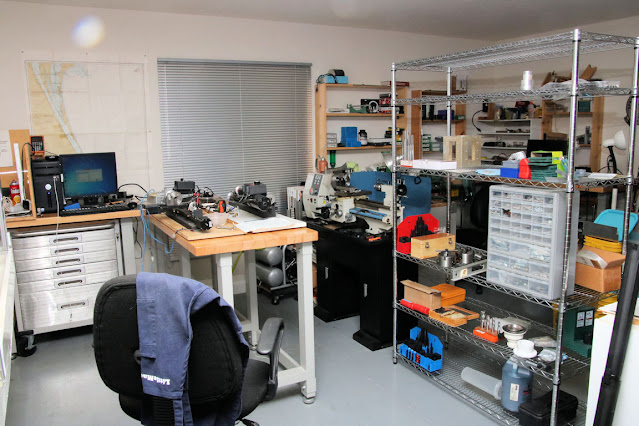 There were some surprises and gotchas, which always seems to be the case in any project.  For one thing, the distances I expected from the model didn't show up in real life.  I wanted enough distance between the table with the two small lathes and the big lathe to the right to get that chair (front left) between them to sit while working at the lathes.  According to the CAD drawing from the left wall to the base of the lathe should have been 11 feet.  I laid a tape measure on the floor and found it to be 10 feet.  Everything seemed to be where it should be and the right size, how could they be a foot different?  I've been around enough construction to know that sometimes dimensions on a drawing are viewed more as suggestions than requirements, but the distance from the left wall to the right edge of the back window was within a couple of inches of what the drawing said.

I eventually just shoved the lathe and the new shelves toward the right. They may still need to move another few inches.

Compared to yesterday, you'll note that the computer was moved down to the right side of the bench along the back wall compared to the drawing that had it on the left.  My thought was that putting the computer between the small mill and small lathes would allow me to see either machine from the computer equally well, while working on the lathe before was much harder than working on the mill.

It leaves me in a little bind because I had to use a special cable for the CNC control box I built for the big mill and needed to use an arrangement of cables and lengths for the three machines that was different from before.  Another example from the "you can't get something for nothing" file.  I need to get a short parallel port cable: DB-25 M-F.  Both the big and small mill work properly under computer control.  The compressor, visible along the back wall below the blinds, is hooked up to the Fogbuster cooling system.  The only thing I couldn't do tomorrow that I could do before this all started would be to use the CNC lathe.

The next couple of days will be less strenuous, but I've moved some of the small tools I want in the machine shop over to the new shelves, freeing up room on the shelves in the woodworking area of sandpapers and odds and ends that are on workbenches.

I need the space because I've decided to take the plunge into the world of 3D printing and I'll need a place for the printer.  I've ordered a Creality Ender 3 V2 (not from these guys, they're out of stock).  I've been diving into the world of getting started with one and the process is very similar to what I've been doing all along.  Parts are designed in CAD and then go through a different kind of CAM (Computer Assisted Manufacturing) program, called a slicer.  When presented with a solid model, all the CAM or Slicer knows is the outside.  You tell the slicer how thick the walls should be and how much fill-in is between the outside lines and it turns those into slices that the printer makes.  The printer puts down thin lines of heat-softened plastic.