I've been watching the activities at Boca Chica for quite a while now, and today was probably the most remarkable day of testing I've seen.  Like many people, I started watching the Lab Padre feed around mid-day in hopes of a static fire test.  Last night, they had extended the 8A to 5P road closure and were working toward a static fire by 8PM (CST).  That attempt was aborted in the last minute, prompting concerns and belief that they'd be troubleshooting and trying to repair whatever it was.  After that I was expecting to see a static fire at some point, no matter how late in the day 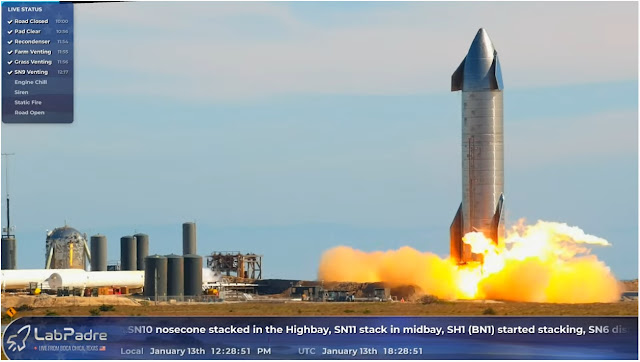 As you can see from the text at the bottom, this firing happened at 12:28:51 local time.  Right away, it didn't look like last night's attempt.  Within seconds, certainly within a minute of last night's abort, the vehicle was venting large clouds and conventional wisdom was Starship was detanking.  That didn't happen after this firing.  Soon, someone posted that Elon said they were going to do multiple firings today.

To be clear, that time tag is EST, so 1:06 at Boca Chica, roughly 40 minutes after that screen capture.  I'm not sure what he was referring to as "two starts completed," unless one was some other time.

By the end of the day that doesn't add up because they went on to have two more static firings today; the three were at 12:28, 2:23 and 3:37 PM.  Musk later tweeted, "all three static fires completed & no RUDs!" (Rapid Unplanned Disassembly).

The next big milestone is clearly their launch for their re-try to do the same hop that SN8 almost completed. They believe they've got a temporary fix for the pressurization issue in the small header tank that they experienced on SN8, although they're said to be trying to come up with a fix that doesn't depend on helium as this one does. That's one less thing to take to Mars and one that requires special handling.  That flight will probably be Friday, but I have a hard time keeping up with these guys.  I can see them going for it tomorrow if the situations allow.


While on the topic of space news, I went in search of when NASA intends to do a full up firing of their SLS core stage during its Green Run Testing.  According to the SLS website, NASA is now targeting this coming Saturday, Jan. 16 for the test.


The Green Run test series is a comprehensive assessment of the rocket’s core stage prior to SLS launching Artemis missions to the Moon. The core stage includes the liquid hydrogen tank and liquid oxygen tank, four RS-25 engines, and the computers, electronics, and avionics that serve as the “brains” of the rocket. NASA has completed seven of the eight core stage Green Run tests, including loading and draining propellant for the first time during the most recent test, the wet dress rehearsal, on Dec. 20. During the upcoming hot fire test, all four engines will fire to simulate the stage’s operation during launch.

This will be a major milestone because the system has never been tested before and it will run for the full 8 minutes expected for a mission to orbit.  True, they're using space shuttle main engines (SSMEs) and those have an extensive and excellent life history, but the rest of the vehicle is nowhere near that mature.  The test will not be televised or video live streamed (at least this posting doesn't say so) but one may apply to listen to it by audio telecast on a conference call.  Details at that SLS Website link.