I didn't finish the rearrangements today, but I didn't think that was sure.  Maybe a 75% chance I could, if everything went well and painlessly.

I thought I'd step back and show some 3D models of the starting point and envisioned end point, along with explanation. Like pretty much all the 3D modeling I do, this was done in Rhino3D. It started out in '14, and has been updated and modified several times since. The main part of what I've been doing so far is in the metal shop area.  That's the top left corner in this model, which shows the way the shop has been laid out pretty much since '16 when the big mill CNC conversion was finished. 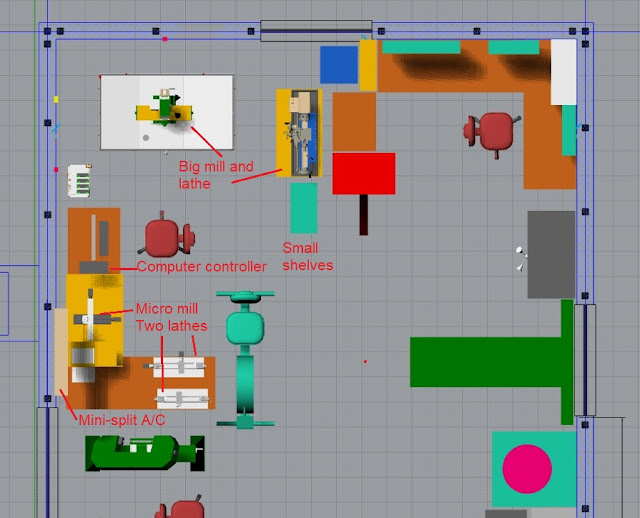 I've labelled the major parts.  The computer along the wall on the left (west) controls the Grizzly mill via that small white box to its right with some parts visible inside it, the CNC Micro mill (a combination of Sherline and A2ZCNC parts) and the CNC lathe (Sherline).  Both of those have small white boxes that don't show any parts inside (that link does).  There's also a manual (non-CNC) Sherline lathe on the bench aligned long axis perpendicular to the west wall.  It's a bit difficult to work on the CNC Sherline and look at the computer if I need to see the display, so that was a minor thing to correct.

There were two motivations for doing this; the big one is what I mentioned yesterday about walking around the shop to get a drill bit or a screw to check threads.  The light green rectangle marked "small shelves" is a bit over 2' long, 18" wide and 2' tall.  I needed more room there.  The other motivation is to clear out the area directly in front of and below the mini-split air conditioner, that beige rectangle running along the west wall (and 7' off the ground).  We clean the filter a few times a year, and it requires climbing on something to get to it.  Besides that, it's going on 7 years old (installed in May of '14) and that means chances of it needing repair are greater than zero and growing. The harder it is to work on, the more expensive the service call.

My first thought and model was to push the the two benches along the west wall over toward the top, getting closer to the big mill's enclosure.  To keep it from going into the enclosure, I had to move that to the right and that just moved lots more.  I eventually thought of swapping the mill enclosure with the two other benches, and arranging them differently. 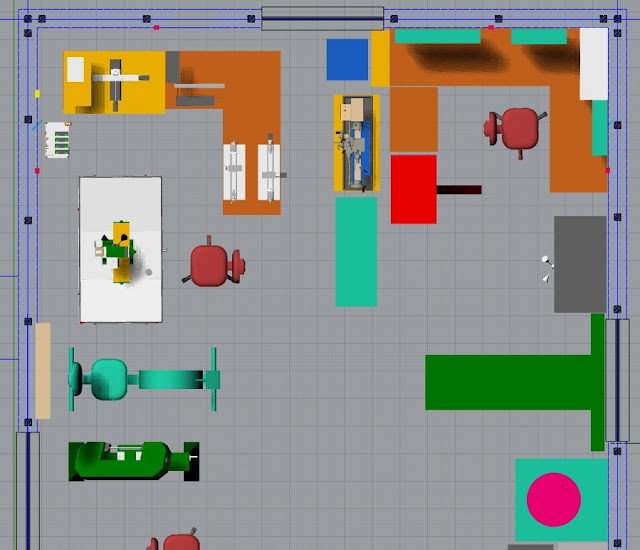 The new shelves are visible just below the big lathe and were the first thing added on Thursday.  The two blocks to the right of them are a set of rolling drawers for that area (brown top) and the shop crane (red, black).  They've been pushed right about two feet.  That wretched light green thing that moved from right of the benches to sitting in front of the air conditioner is a stationary exercise bike that can be moved across the room should we need to let an A/C repair guy get to the unit on the wall.

Today we pulled out the bench with the computer and micro mill and swapped it with the big mill.  Then we pushed it farther toward the top of the pic and rotated it to get that bench in place along the north wall.  It's closer to both walls than this shows.  The bench with the two lathes still remains to be moved.  The compressor (the blue block, top center) will stay where it is and it's hookup to the Fogbuster cooling system on the back of the mill will be modified. The only machine currently hooked up is the micro mill, and I tested it.  It moves normally.

I should be able to get the other table with its two lathes into position tomorrow and work toward making the shop fully functional again.  There's more cool stuff that should be happening to go over in the next couple of days.