If the last few days haven't seemed like complete dystopian life, I don't think you're watching.  Tech oligarchs ban speech they disagree with?  Parler getting dumped by Google, Apple and Amazon?  Dozens getting deplatformed everywhere from Twitter to Facebook?  AR-15.com gets dumped by their ISP with no warning?

And then there's this, lifted mercilessly from Miguel at Gun Free Zone. 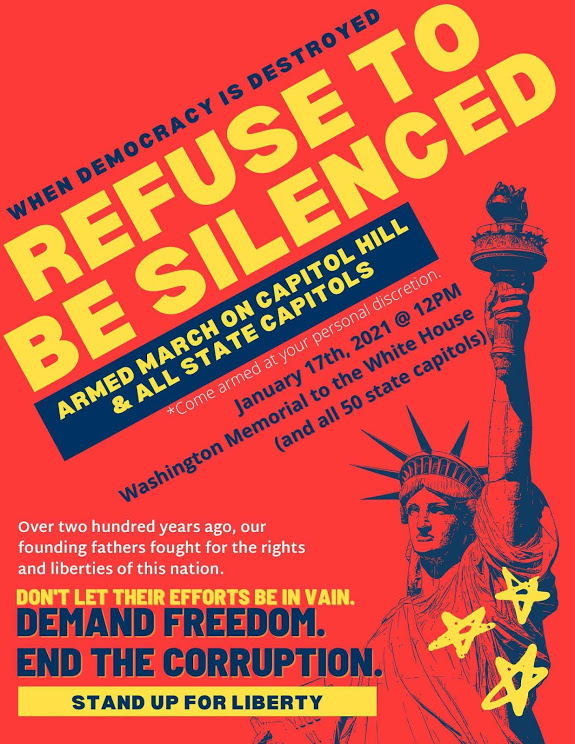 I don't think I've seen a more obvious or less clever trap in my life. The chances that this is real, constitutional conservative organization are right around the chances of winning Powerball - one in 250 million?  Is it Antifa, our government, Chinese government?  Harder to say.

All of this just from the color scheme and general look.  It's so obviously communistic that I'd bet 80% of the parodies on The People's Cube look like this.  No US flag, no red white and blue, just red and yellow.  Are the three stars on Lady Liberty three of the four on the Chinese flags?  Since I mention the lady, notice that picture is swapped left to right - she holds the torch in her right hand not her left hand like this shows.  The only thing missing from a communist poster is the hand pointing the way to the glorious future.

As Miguel points out, notice where it says "come armed at your personal discretion" while talking about going to the White House?  Unless you've just joined the world of concealed carry you should know that carry in DC is just about completely forbidden.  The only people who can carry in DC are approved LEOs, Military on duty or those who have adequately greased the palms of the local politicos.  If you open carry in DC, you're going to jail as soon as they see you.

Suffice it to say, in the immortal words of Admiral Ackbar from the Star Wars universe, "it's a trap!"