The SLS Green Run test of the core stage at Stennis Space Flight center aborted after about 67 seconds today.  The intended test was to be 8 minutes but somewhere just a few seconds short of the shutdown, the NASASpaceflight.com video narrators said they heard something like "MCF" - Major Component Failure - and soon thereafter the engines shutdown. 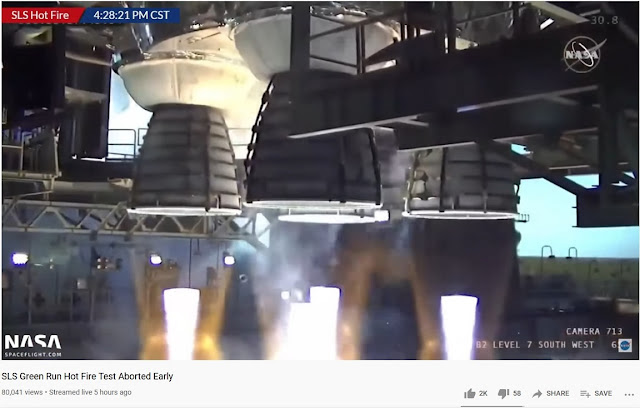 Video capture about 30 seconds into the test.

The commentators on the video say that before the test, someone (Boeing rep.?) had said they'd get just about everything they needed with a minute and a half test, so they came up short of that.  Not to put too much of a smiley face on the situation, but the test is also supposed to test things like the way the software would handle a contingency, and that apparently worked properly.  Everything seemed to shut down in a controlled way.  Nothing was apparently destroyed - the core stage is still in the test stand after the shutdown.

Unfortunately, being a weekend, we're not likely to see anything official out of the SLS program discussing this for at least a couple of days while they analyze their data and try to understand why the system shutdown.