A Modification to my Webster Engine

After I got my engine running for the first time, a few people told me they thought it was shaking too much.  Some said it's a common problem with these little engines.  One or two told me they had modified their engine to make it more resistant to the forces causing it to wobble.

The best place to start is to simply ask why does it wobble?  It seems to come down to the way the cylinder and head are supported.  Most everyone has seen that things supported just by one end aren't very secure compared to support at both ends or multiple points.  The cylinder is supported at one end; ideally it might be best to support it at both.  The head is mounted to the cylinder by four small diameter screws.  It's held to the base plate by one big screw and to the frame by two small screws on one side.  The cylinder gets the piston being pushed hard into it, and then being pushed hard back out by the combustion explosion.  The cylinder seems to rock forward when the piston pushes into the cylinder and then rock back down when the piston is pushed back out. 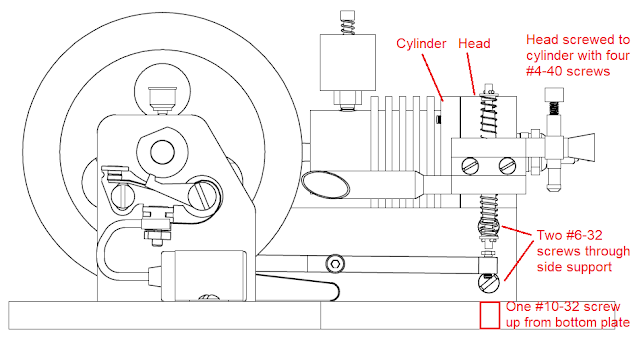 It just seemed if I could support the head and add resistance to movement forward and backward, that it should improve things.  This is what another modeler on forums said he had done.

OK; so how do I do that?  The best place to add reinforcement is farthest from the plate, where the torque is the highest.  The problem is that the cylinder head isn't a big assembly and it's tough to find a place where a screw doesn't interfere with something.  The top of the head, the part holding the cylinder, is 1.500" inches across, and the combustion chamber is a 1.00" diameter by 0.5" deep bored out area, leaving a maximum of 0.250" between the walls and damaging something.  In the corners, where there's the most metal for me to put a screw into, the mounting 4-40 screws for the cylinder are located.

I started working on the drawings, looking for a place to put a couple of screws and quickly realized that the screws present in the assembly aren't shown as hidden lines, the convention in engineering drawings.  There was a note on the drawing that said, "Hidden lines omitted to help clarity."  Great.  I had to add them.  I found a place to add a couple of screws on the opposite side of the assembly from the two #6-32 screws.  I opted for #8-32 screws.  It would double the amount of resistance to the torque it's exposed to, but is it enough? 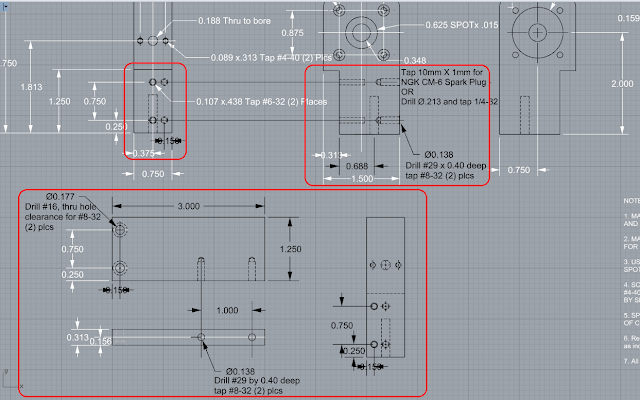 With the two new holes, I laid out a small bracket to screw to the head on one end and into the base plate on the other (bottom rectangle).  You can see lots of hidden lines in this view; I added all of them.

A little search around the shop led me to a piece of scrap the same thickness as the side plates (5/16" or 0.313").  It's left over from when I cut the two side plates in June of '19.  It had an odd shape, but I just needed to trim and square it up a little to have something usable.  A second search led me to find exactly two screws for each of the two places.  That meant I had what I needed to clean up the scrap and make a brace. 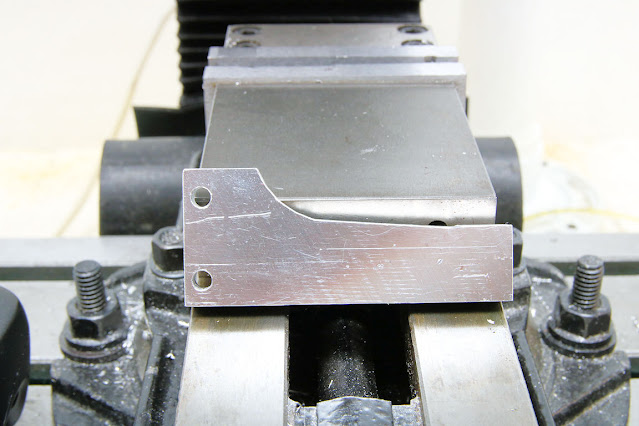 To be honest, taking my engine completely apart to add this is just about as appealing as rolling in a fire ant mound, so I spent some time trying to figure how to transfer these holes to the engine.  First, I'd clamp that bracket to the cylinder and use it as a guide to drill and tap the #8 holes.  Once it was held in place, I could measure the distance from the centerline of the two new, vertical holes to the two holes on the bottom right of the brace in my CAD program and then move the engine onto my mill (best drill press I have) to drill the holes to match the base.

It actually all went together easily. I was mildly surprised but happy.  Pay no attention to the fact that the two 8-32 screws on the side holding the new bracket don't match.  One isn't stainless. 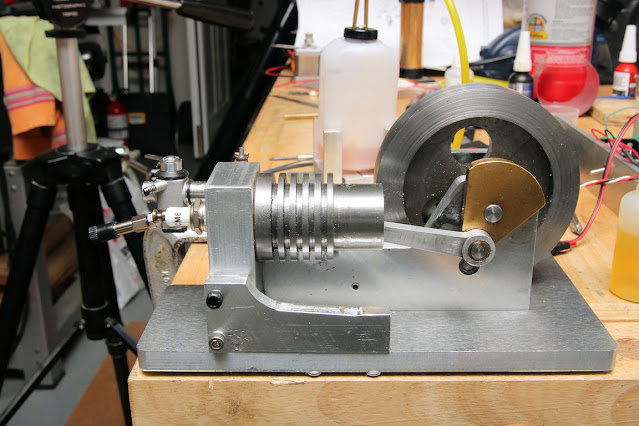