The last couple of days of watching the goings on at SpaceX Boca Chica have been strange.   The test flight was scrubbed due to weather on Wednesday, then scheduled for tomorrow.  Midday, the test count was halted again, this time because the FAA had notified SpaceX that their permission to conduct the test flight was rescinded.  Later in the day it became apparent the vehicle was being fueled again and viewers couldn't tell if it was to try a launch, or try to be ready to launch if approval came in, or simply another cryogenic test.

It's hard to determine what's actually happening because there's nothing published about it with enough detail to know.  Neither SpaceX or the FAA has said much of anything officially, although an FAA official made a pretty generic statement, “We will continue working with SpaceX to resolve outstanding safety issues before we approve the next test flight.”  That might seem more appropriate if this wasn't almost an exact duplicate of the vehicle from the last test and the mission profile that it flew.

For his part, Elon Musk Tweeted:


Unlike its aircraft division, which is fine, the FAA space division has a fundamentally broken regulatory structure.

Their rules are meant for a handful of expendable launches per year from a few government facilities. Under those rules, humanity will never get to Mars.

Since everywhere else in the Fed.gov that we can see is undergoing regulatory expansion and regrowth, it's possible the FAA is looking at SpaceX again trying to figure what new, capricious regulations they could put on them and what kind of fees they can raise.  Trump ran a very laissez-faire administration and tons of redundant and outdated regulations were dumped.  Back in 2017, the administration had said that while they had asked regulatory agency heads to get rid of two old, useless regulations for every new one passed, and they had actually gotten rid of 22 regulations for every new one!

Late today, though, we got something we've never seen.  Two Starships on test stands within tens of yards of each other: 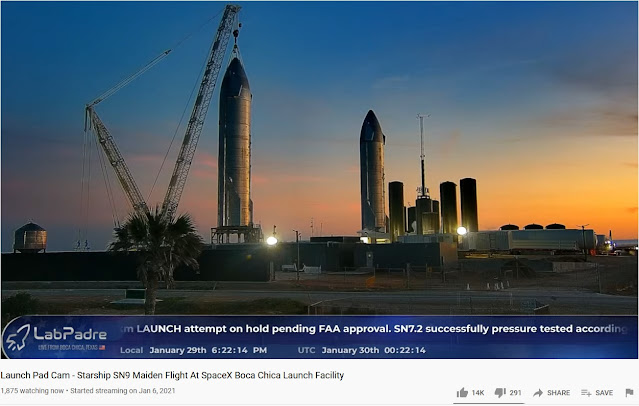 That's SN10 on the left, still being put on the test stand by Bluto the crane with Eileen to the right.  This is the launch pad camera on Lab Padre, not the usual Nerdle camera that I watch.

Eric Berger at Ars Technica, one of the few level-headed reporters at Ars, put up a piece around the end of the day today with this take on what's going on.  He thinks there's an increased attention to safety in the area, possibly since there's still a small residential community on Boca Chica and something about the SN8 flight made the FAA more concerned about safety.  SpaceX evacuates the area when they're doing a test and puts the community up in a nearby hotel at their own expense.