During the final days of the campaign in '16, candidate Trump said he'd ask department heads to remove regulations at 2:1, that is, two removed for every one added.  As the spreader of Tales From the Over Regulated State, I was very happy to hear that.  Instead, Trump revealed in December that they had achieved 22:1 regulations removed to added, which is really change I can believe in.

The Competitive Enterprise Institute noted by the end of last year that the Federal Register for the year had the fewest pages since 1993 - a quarter of a century.


The calendar year concluded with 61,950 pages in the Federal Register… This is the lowest count since 1993’s 61,166 pages. …A year ago, Obama set the all-time Federal Register page record with 95,894 pages. Trump’s Federal Register is a 35 percent drop from Obama’s record… After the National Archives processes all the blank pages and skips in the 2017 Federal Register, Trump’s final count will ultimately be even lower. [Bold added - SiG]

Consider this graphic excerpted from the CEI 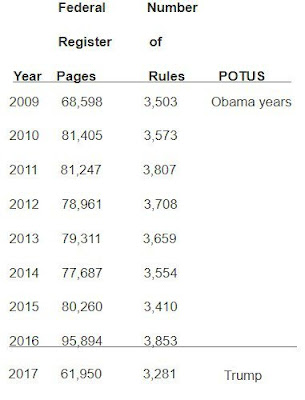 Wayne Crews of the CEI adds:


Of course, the Federal Register may be a poor guide for regulation, but Washington doesn't go out of its way to honestly measure itself and disclose regulatory impact.

The “problem” of assessing magnitude is even worse this year, because many of Trump’s “rules” are rules written to get rid of rules.

Director of the George Washington University Regulatory Studies Center Susan Dudely writes for Forbes on the differences Trump is making.


The pace of new regulation has visibly slowed in the Trump administration. A search of OMB’s database reveals that, between January 21 and December 20, 2017, the Office of Information and Regulatory Affairs concluded review of 21 “economically significant” regulations—those with impacts (costs or benefits) expected to be $100 million or more in a year. As the chart below shows, that is dramatically fewer rules than previous presidents have issued in their first years. This same database shows that Presidents G.H.W. Bush, Clinton, and G.W. Bush each issued 39 or 40 in their first years. President Obama issued 52 and even Reagan (considered the last deregulatory president) issued 36 economically significant final rules during his first year in office. 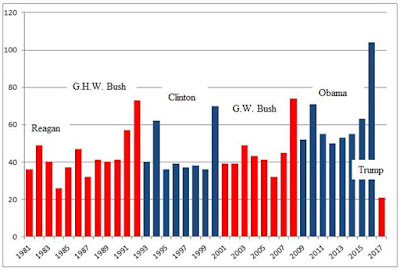 The Forbes article on deregulation opens with this photo opportunity shot of Trump showing the regulatory growth since the 1960s and promising to return federal regulations to 1960s levels.  Without dismantling yuge swaths of the Federal hydra, that's impossible.  Most of those regulations come from agencies that didn't even exist in the '60s; e.g., no EPA, no Department of Energy, no OSHA, no Department of Homeland Security, no Consumer Product Safety Commission and no Consumer Financial Protection Bureau. To name a few obvious offenders. 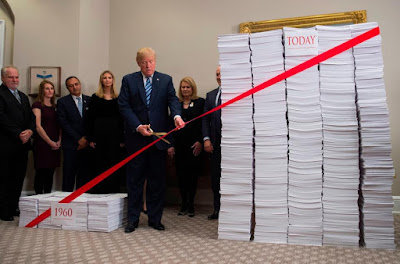