Is This the Year Humans Launch from the US Again?

That's the provocative subtitle of an interesting piece on ARS Technica which lists the launches they find most interesting in the coming year.

The first thing they mention is the SpaceX Falcon Heavy, which is likely to launch this month.  The company has said they plan to test fire the boosters this coming Thursday, and the vehicle is on pad 39A as we speak.  An ambitious vehicle with 5.1 million pounds of thrust, capable of launching "37,000 pounds to Mars", SpaceX fans have been eagerly awaiting the first launch since it was announced in 2005, but its development was dependent on all of their other launch hardware and (probably most importantly) their experience.  That view tends to be something those not "in the business" don't understand. 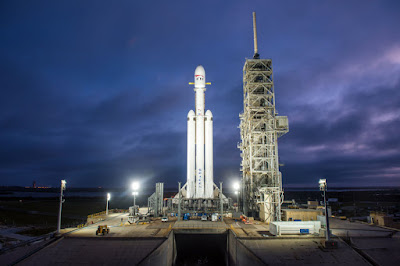 And if you haven't heard the rumors, the plans for the first launch are a bit PT Barnum-style "in your face":


Although this is just a test flight—with a whimsical payload of Elon Musk's cherry-red Tesla roadster bound for an elongated orbit around Mars—the flight of the Falcon Heavy nonetheless represents a landmark moment in the US spaceflight industry. It will mark the first time a US company has developed a heavy lift rocket with largely its own financing. True, SpaceX leveraged some NASA funding to build the Falcon 9 rocket. But it has developed the core stage and integrated two Falcon 9 boosters to create the heavy rocket with its own resources. This is a truly private rocket. [Bold added - SiG]

Throwing a Tesla car into orbit around Mars only solidifies Elon Musk's reputation as a huckster showman.

A rather interesting, if not fanciful, mission is the launch of a light sail for the Planetary Society.  Likely to be in Quarter 2 or 3 of the year, on the third launch of a Falcon Heavy. 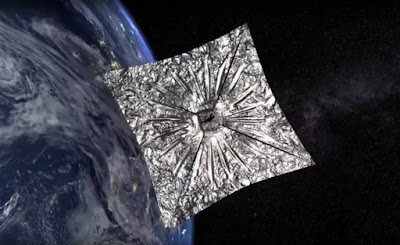 Sails that propel a craft by riding on the solar wind have been talked about for a long time and launched before, but are still in their infancy and missions are trying to prove the concept is useful.


The crowdfunded project will attempt to make solar sail-powered flight in Earth orbit. Once in space, the 61cm-long spacecraft will separate from the upper stage of the Falcon Heavy rocket and undergo a series of maneuvers to deploy a light sail made of Mylar that will spread out to encompass an area of 32 square meters.

After the light sail has deployed, the spacecraft will attempt to use the constant pressure from solar particles to raise itself to higher orbits around the Earth, perhaps by as much as 1km per day. If this test is successful, solar sail technology could be deployed on future missions as low-cost, propellant-free propulsion to explore planets and moons in our Solar System.

A mission I've previously heard some talk about, but not the interesting details, is China's proposed Chang'e which is two-fold mission likely to launch in the second half of year (Q2 to Q4).  The part everyone talks about is to land on the far side of the moon.  That immediately raises the problem  of how the satellite communicates back to Earth, since the moon both blocks radio waves, so  I assumed that they were going to launch an orbiter that would relay information from the surface, but the proposed mission is more ambitious.  The Chinese propose to put a relay point at the Lagrange point L2, which is in orbit around the sun, not the moon, and about a million miles from Earth.  Description of L2 orbits here.

A very interesting mission, and the only one virtually iron-clad guaranteed to be on schedule, the New Horizons spacecraft that went past Pluto in 2015 is going to flyby the Kuiper belt object called 2014 MU69.  Since the spacecraft's position and motion are known very precisely, as is the position and movement of its destination, this flyby is guaranteed to a level of certainty that no other mission in the article can match.  I can only imagine two things that would stop it: New Horizons hits an unknown object first or the Klingons show up and use it for target practice. In the case of an unknown object, the risks are tiny but real; in the case of the Klingons (or other extraterrestrials) that risk has to go to as close to zero as you can imagine.

Old movie references aside, and getting back to the title of the post, both SpaceX and their competitor Boeing are saying they're "on schedule" to test their manned vehicles for bringing crews to the Space Station.


Officially, both companies say they are on track for crewed launches this year. Boeing plans an uncrewed flight test of its Starliner vehicle in August, with an initial flight carrying astronauts in November. SpaceX has said it will make a test flight of its Crew Dragon vehicle in April, with a crewed mission in August.

However, there are good reasons to be skeptical about those dates. Sources have told Ars that both companies have plenty of work to do to get ready for human test flights. Moreover, NASA has yet to announce specific two-person crews for each of those human test flights, and such assignments are likely to be made at least a year before the flights themselves occur. (There are four commercial crew astronauts, Robert Behnken, Doug Hurley, Sunita Williams, and Eric Boe). And finally, NASA has moved to begin formally acquiring Soyuz seats to launch its astronauts in 2019.

There are other missions in the article that I leave out, but since some of you readers are much more closely involved with the Cape than I am, I'm interested in hearing your versions of the "most interesting missions" for 2018.

Posted by SiGraybeard at 3:49 PM