If You're Following My Antenna Project

This is for anyone following this project and wanting to duplicate it.

I have an important update to Saturday's post.  I made a dumb mistake and connected the ground radial to the wrong place.  This picture explains: 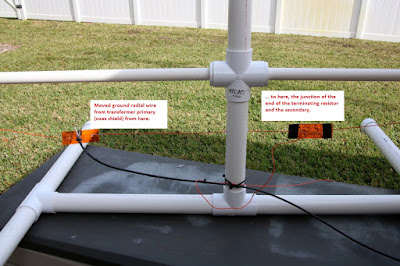 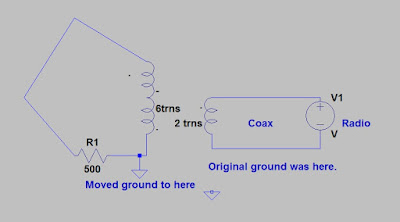 That awkwardly shaped thing on the left is supposed to mimic the loop.  The ground goes electrically between the transformer secondary and the termination resistor.  In my implementation, that junction is about 2 feet long, which is electrically short enough to not matter.  I could have connected it just by moving the wire to the far side of the plexiglass strip on the left, but moved it to the one on the right.

When I hooked up the loop yesterday, it didn't work. Receive signals were much weaker than signals from the vertical antenna I generally use.  While doing some troubleshooting, I noticed my mistake and fixed it this morning.  Using the vertical and antenna tuner, WWV at 10.000 MHz was moving between S5 and S9 (pretty crappy conditions); switching to the loop and engaging the radio's high gain preamp, it was the same, as accurately as I can tell.  With 25 dB swings like that, it sure isn't like using lab equipment and getting stable numbers.  I did a much briefer test on 40 m and the two antennas sound very close to each other in performance, if not the same.

Now that I know it's working, it's time to try it out in use and see if I can find out if this whole project was worth the time, effort and cost (admittedly not much cost).